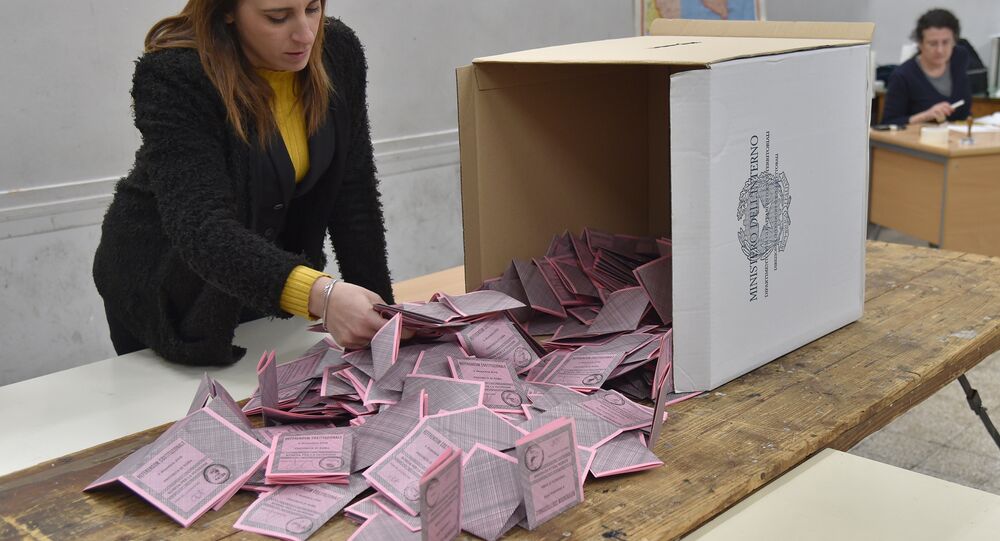 ROME (Sputnik) - After a number of highly unpredictable votes in the last two years in Europe and across the ocean, it is now Italy's turn to test how far the anti-establishment and populist mood in the country may go at the general election on Sunday.

Experts claim the upcoming contest to be one of the most erratic political events in the country in decades. Moreover, The Sunday vote is going reportedly to showcase the popular sentiment of dissatisfaction with the economic situation and migration crisis in the country.

No Longer a Joke

The M5S "anger party", established just several years ago by a comedian Beppe Grillo (though its official candidate now is a 31-year-old Luigi Di Maio), is no longer a joke.

It all started as a protest political force giving voice to the Italians dissatisfied with capitalism and corruption. M5S has since then experienced a surge in popularity, although it is unclear whether it will be able to form the government on its own, which requires reaching a 40-percent threshold at the Sunday vote.

"If after the election no majority is achieved, the 5 Star Movement is ready to open the table for discussion not of a coalition, but rather identifying the main points for the government. It's a possibility and they may also find some people who will join them," Federico Niglia, international relations professor at LUISS University of Italy, told Sputnik.

© AP Photo / Gregorio Borgia
WATCH as Anti-Fascist Protesters Fight With Police in Italy’s Turin
"The only coalition that has a chance to win outright is the center-right. All other options would imply a hung parliament," Lorenzo Codogno, professor at the European Institute of the London School of Economics, who used to be director general at the Treasury Department of the Italian Ministry of Economy and Finance, told Sputnik.

Nigla pointed out that Berlusconi was able to come back strongly with the help of Salvini, and the center-right managed to create a coalition in a very short time.

According to the expert, this coalition, should it win, might face difficulties in implementing taxation or immigration reforms. But, in general, "there might be a good cohesion among the three — Fratelli d'Italia, Forza Italia and Northern League — with Berlusconi playing a role from outside," he added.

Do Left Have a Chance?

Nevertheless, the center-left — the ruling PD in alliance with pro-European Piu' Europa (More Europe) and some other centrist groupings — do have a chance of winning, experts believe. However, caretaker Prime Minister Paolo Gentiloni may need to join forces with Berlusconi for that, and it is unclear if the latter would be willing.

© REUTERS / Flavio Lo Scalzo
Berlusconi Mulls Return to Political Life Next Year – Reports
"If there is no agreement, eventually Italy will have to go to elections again, probably after the summer. It will be a negative scenario, as it will be difficult for Italy to do anything within the next six months without a full-fledged government. Gentiloni will stay as a take-carer, but certainly with no major reforms and no major initiatives," Codogno added.

In case the governing PD party, led by Matteo Renzi, is defeated everywhere, it is likely to face the problem of the leadership change.

"In the center-left area there is a big issue which is the problem of the weakening of the Democratic Party. The PD is paying the price for having been in the government until now," Niglia said.

The future of Italy is likely to be decided in Italy's poor south, which holds the key to this election.

While Berlusconi has his supporters in the north, M5S might see a strong show of support in the rural and southern areas.

"Certainly the vote in the south of the country will be key. Even with the electoral system which is 37 percent first-past-the-post and 63 percent the proportional representation, there is a number of constituencies in the south of the country where there will be a very close fight between the center-right and the Five Star Movement. Depending on how it goes, that can become the swing vote. They can actually make the winner basically, at the national level," Codogno said.

Still, the number of undecided voters is very high. The two above-mentioned experts believe the reasons are "lack of political offer," "confusion regarding the programs of different parties" and "kind of a suspicion towards politicians and politics."

Strong anti-establishment mood, high number of the undecided, and a swing vote in poor or rural areas can make one think of two similar occasions — Brexit referendum and the 2016 US presidential election, which put Donald Trump into the Oval Office.

However, analysts tend to view the Italian case outside of this context.

© AFP 2021 / Daniel Roland
Projected Right-Wing Rise in Italy Challenges Eurozone Unity
Niglia described Brexit as a reflection of the mood specific to the United Kingdom and unlikely to be found in the rest of Europe.

"The continental Europe may have the malaise of the ongoing criticism concerning the EU, but I wouldn't put these phenomena on the same level," Niglia said.

Anti-establishment movements in the United States and Italy have different roots, he added.

"For example, Trump is typical for some parts of America. But Five Star Movement is relatively new, and they are a mix of left-wing and right-wing orientation," he added.

Whether Italy is going to resist its unique anti-establishment mood remains to be seen on Sunday. If the test is not passed, Italy is likely to face problems in its relations with the eurozone and send shock waves across Europe.