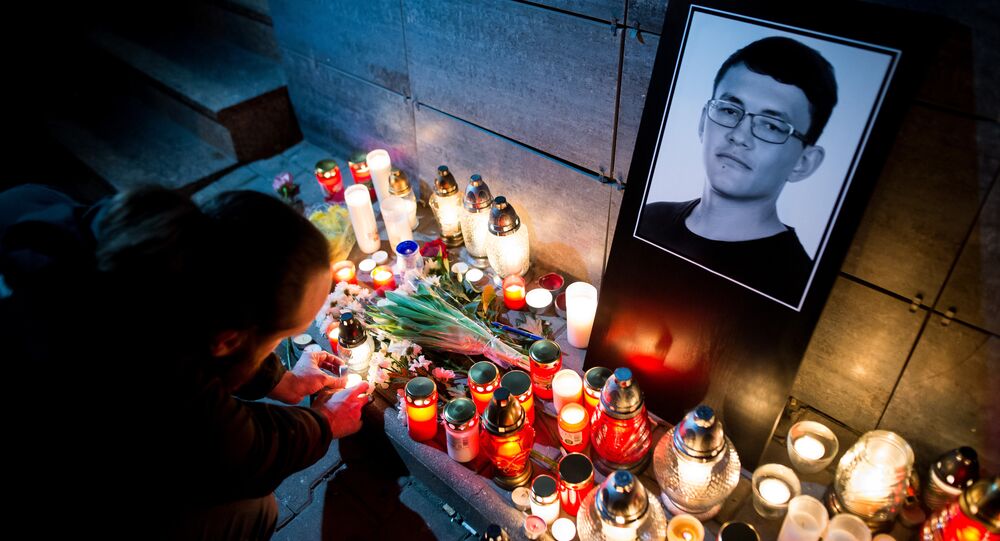 Five months after Maltese reporter and blogger Daphne Caruana Galizia was killed by a car bomb, another investigative journalist has been assassinated in Europe. Jan Kuciak, who was killed along with his girlfriend in Slovakia, had also been investigating business transactions on the island.

An investigative journalist and his girlfriend were gunned down on Sunday, February 25, in an assassination which was almost certainly linked to his work.

Jan Kuciak, 27, had been investigating a Slovakian businessman who invested in property in Malta.

His murder comes only four months after Maltese journalist and blogger Daphne Caruana Galizia was killed by a car bomb on the island.

​Kuciak worked for Aktuality, a Slovakian website which was owned by German news organization Axel Springer.

He specialized in tax fraud and money laundering investigations and had accused Slovakia's ruling Smer-SD party of having links with shady businessmen and the local mafia in Bratislava.

Kuciak and his girlfriend Martina Kusnirova were killed at his home in the village of Velka Maca, 50 miles east of Bratislava.

When investigative journalists become the target, you know there is a deeper problem.

We will keep up the pressure for action on an EU level to protect journalists, to safeguard the #RuleOfLaw & preserve #FreedomofSpeech

Axel Springer condemned the "cruel assassination" of the journalist and the Slovakian prime minister Robert Fico offered a one million euro million reward.

Kuciak was reportedly digging into transactions carried out by businessman Marian Kočner and in September he reportedly filed a motion against Kočner, who he accused of threatening him.

"Already, 44 days have passed since I filed the criminal motion against MK for threatening me and still, my case has probably not even been allocated to a specific officer yet," Kuciak wrote on Facebook at the time.

​Last year a luxury apartment complex in Bratislava was at the center of a political scandal.

"From the information available it seems that the most likely version is a motive connected to the investigative work of the journalist," said Slovakian police chief Tibor Gaspar.

Several journalists in Malta, including Ms. Caruana Galizia's son, Matthew, have said Kočner had links with the island.

Kočner's daughter reportedly married his Maltese lawyer, Christian Ellul. Although they have since divorced Ellul is still a director of one of Kočner's companies.

Second EU investigative journalist killed in five months. Ján Kuciak was murdered at his home in Slovakia (along with his girlfriend). Earlier, Daphne Caruana Galizia was assassinated in Malta. Both journalists had investigated money laundering.https://t.co/V2QHDlpdps

In 2012 Malta Today claimed Kočner was linked to the transfer of four million euros from a Maltese bank to accounts in Slovakia.

The payments were said to be to Slovakian politicians and the so-called "Gorilla" scandal led to the parliament building in Bratislava being pelted with bananas.

The leader of Slovakia's neo-liberal Freedom and Solidarity (SaS) party, Richard Sulik, was also seen at Kočner's home at the time. Sulik denied any wrongdoing.

The EU cannot accept that a journalist is killed for doing his job. I call on the Slovak authorities to launch a thorough investigation with international support if needed for Jan Kuciak. As with #DaphneCaruanaGalizia, the European Parliament will not rest until justice is done

​After Kuciak's murder the Organization for Security and Co-operation in Europe (OSCE) came out with a statement about the freedom of the media.

"We cannot accept  journalists to become regular targets for attacks and killings because of their investigation on corruption," they said.

Shocked by the murder of a journalist in the EU. No democracy can survive without the free press, which is why journalists deserve respect and protection. Our thoughts go out to the loved ones of Ján Kuciak & his girlfriend Martina Kušnírová. Justice must be served.