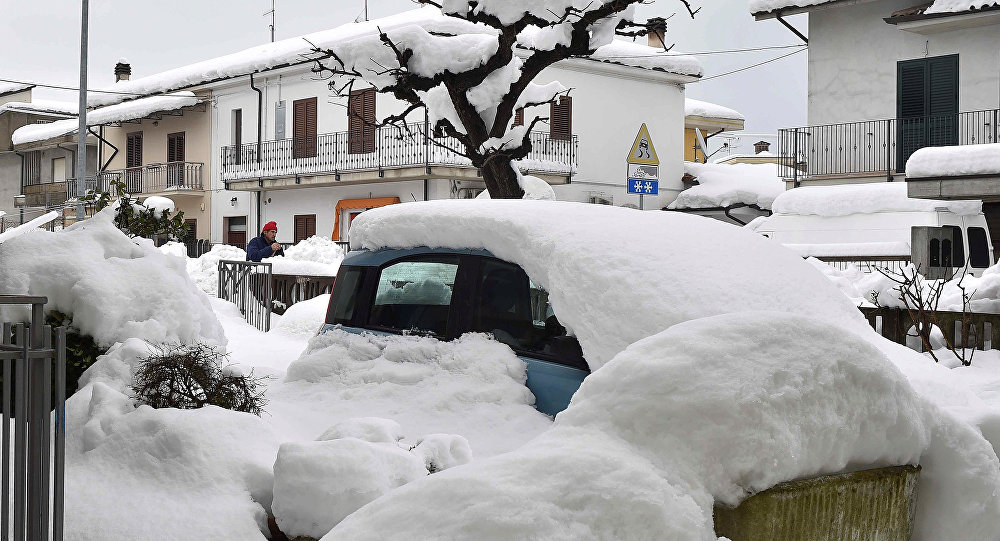 The Arctic storm dubbed the "Beast from the East" paralyzed Rome on Monday, crippling the city's entire transport system. However, some local residents saw a rare opportunity in the abnormal snowfall: a chance to spent time joyfully building snowmen and sledding.

According to Rome authorities, schools and some public institutions were ordered closed on Monday, while the railway and traffic system partly shut down. Italy's civil protection agency has even deployed army servicemen to clear off the thick blanket of the snow.

However, the sudden blizzard seemed to bring a marvelous mood to locals. Despite official warnings, most of the rare snowstorm's witnesses decided to ski in famous places of Rome and to have fun in the foul weather by building snow castles and figures, even going snowshoeing and skiing, local media outlets report.

Snowboarding at the Colosseum ❄️ See how people spend their snow days in Rome https://t.co/aPRK5u304X pic.twitter.com/E5VQe8SZnL

By the evening the slush-covered streets were clean of snow. However, city officials are keeping some municipal organisations closed on Tuesday for a second day. Due to the freezing temperatures, residents were warned that traffic may continue to be disrupted because of the ice that has already covered most parts of the city.

Rome was blanketed in snow after a rare snowfall hit the Italian capital with some areas reaching up to 5cm (1.97 inches) in coverage. pic.twitter.com/XbiRh4elzJ

The extremely low temperatures coming in with the storm were first dubbed "The Beast from the East" by British media outlets, citing the Siberian Arctic colds as the source of the frigid temperatures. Meteorologists say that the storm has moved south and west and is expected to cover much of Europe over the next few days with freezes and blizzards.

A beautiful photo of Rome under the snow ❄️❄️ pic.twitter.com/JzoRvcgWS7

Snowstorm of the Century: Moscow is on It, but Damage Grows (PHOTOS)

Over 140 Flights Canceled in Japan Due to Heavy Snowstorm