In a keynote speech early next week, the UK's Labor Party leader Jeremy Corbyn is expected to urge the party to support Britain's permanent membership in a customs union with the EU.

At least 80 high-ranking officials in the UK's Labor Party have called on its leader Jeremy Corbyn to back the idea of Britain remaining in the EU's single market after the country's withdrawal from the bloc.

The Observer cited a statement by the group of MPs, MEPs, council leaders and trade unionists as saying that Corbyn will fail to deliver on his promise to invest in schools, hospitals and social care if the UK retracts its single market membership.

"If we want to build a modern, low-carbon economy that protects workers and tackles tax avoidance, we will only achieve it through collaboration and frictionless trade with our nearest neighbors," the statement said.

The group, which includes eminent Labor politician Peter Mandelson and trade union leaders Bill Morris and Tony Young, also warned that "we can only properly fund services, schools, hospitals, social care and international development if our businesses thrive and our economy grows."

"So – as a minimum – Labor must clearly and unambiguously set as a negotiating objective the goal of remaining part of the European economic area, in order to participate on a permanent basis in the single market. […] It is the only way we can continue to enjoy the exact same economic benefits of our existing arrangements if Brexit happens," the group emphasized. 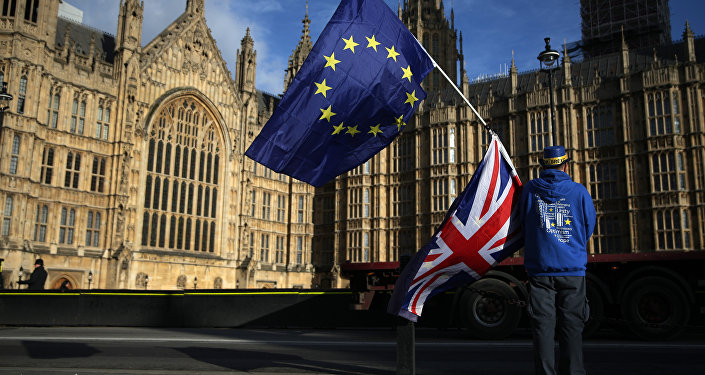 © AFP 2019 / Daniel LEAL-OLIVAS
'Big Problem': Analyst Says Stopping Brexit Would Be Disastrous for UK Democracy
The statement comes a day before Corbyn is expected to deliver a keynote speech on Brexit in which he may announce the Labor Party's considerable shift in policy and commit it to supporting the UK's customs union with the EU, something that was earlier rejected by the government.

Brexit negotiations between the United Kingdom and the European Union kicked off on June 19, 2017 and are due to wrap up by the end of March 2019.

The talks' first phase focused on the protection of EU citizens' rights in the UK, the British-Irish border and London's financial obligations to Brussels after the withdrawal.

The second stage began in December and concentrates on the transition period in EU-UK ties after Brexit and future trade and security collaboration between the parties.

Conservative Backbenchers Remind Theresa May of Vulnerability on Brexit