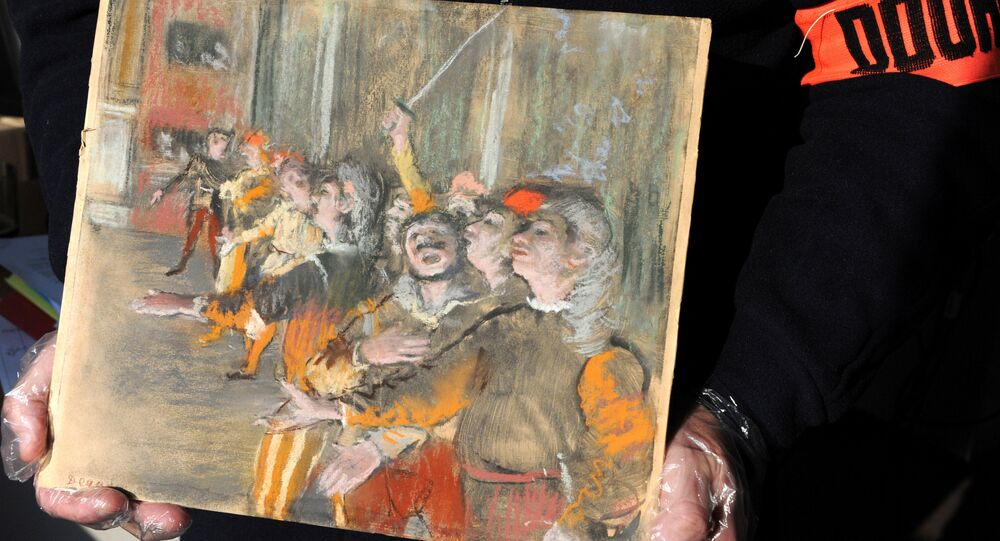 The recovered painting, valued at $1 million, was stolen in 2009 from a museum in Marseille, where it was on loan from the Parisian Musee d'Orsay.

French border police have found a masterpiece painted by 19th century impressionist Edgar Degas in a luggage compartment of a bus near Paris.

Experts confirmed that the finding was an authentic painting called "Les Choristes" ("The Chorus Singers") by Degas, which features a scene from Mozart's opera Don Giovanni. The artwork measures just 10 by 13 inches.

Happy Friday news! This Degas painting, stolen from a Marseille museum in 2009, has been found in the luggage compartment of a bus near Paris. Degas painted Les Choristes, showing a group of opera singers, just before he began to lose his sight. pic.twitter.com/2JzsmaC2Pq

© AFP 2020 / SAUL LOEB
US Returns Stolen Picasso Painting Valued at $15Mln to France
The French Ministry of Culture said police were surprised to find the artwork with the signature "Degas" inside a suitcase in the luggage compartment of the bus. The ministry said none of the passengers claimed the suitcase during the searches in the vehicle.

French Culture Minister Francoise Nyssen said she was delighted by the recovery of the piece, the loss of which "represented a great loss to the French Impressionist heritage."

Edgar Degas, who is famous for his paintings of dancers, was born in Paris in 1834. According to the experts, he is one of the most outstanding masters of impressionism. Impressionism originated in France in the late 1860's. This art aimed to capture the real world in its variability in the most natural and unbiased manner, so as to transmit the painter's fleeting impressions.