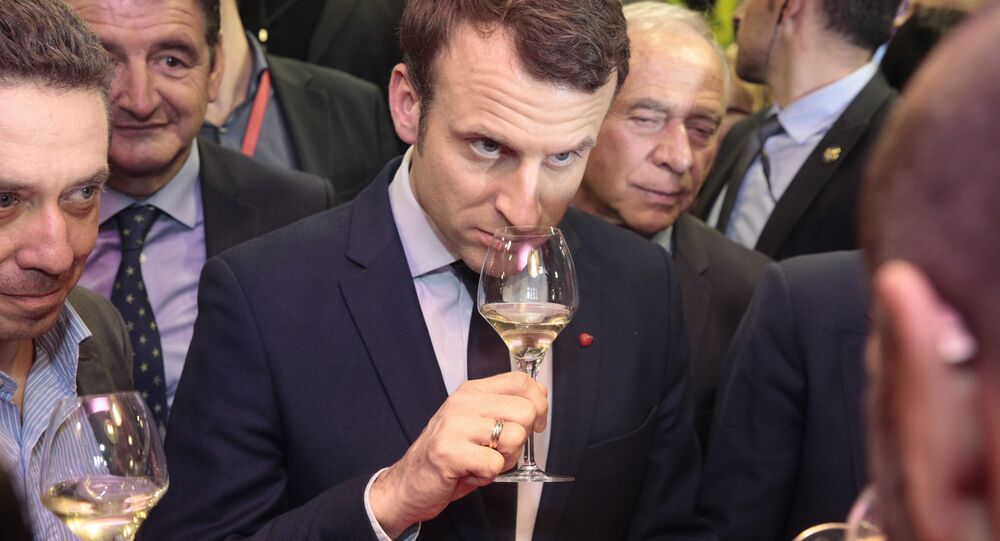 Recently the French health minister has announced that wine is detrimental to health like any other alcohol, the claim that was met mostly by anger and resentment among citizens, defending France's traditional drink.

French President Emmanuel Macron said that he would not allow to equate wine with strong alcohol and stressed that he drinks a "traditional French drink" twice a day, France Info radio reported on Friday.

Macron also added that during his presidency he would not allow "any amendments to tighten alcohol and tobacco legislation."

© REUTERS / Charles Platiau
'Imperialist' Approach: Macron Slammed Over 'Having a Hold Over Ex-Colonies'
During the press conference held on Thursday, the president said that "the health of the whole society faces an enormous threat, as young people are getting more and more drunk with strong alcohol beverages or beer, but this is not the case with wine."

The debate over the pressure on alcohol legislation broke out in France in early February, when the country's Health Minister Agnes Buzyn stated that "the wine industry makes people believe that wine is different from other alcoholic beverages" and can positevely influence health condition, whereas, "it was scientifically proven that drinking wine is the same as drinking beer, vodka or whiskey."

In response, geographer Jean-Robert Pitt, writer Bernard Pivo, oncologist David Kaya and a few members of the French Academy of Wine published an article in the Figaro newspaper urging the head of the French Health Ministry "to stop demonizing wine which is a part of the French civilization."

During the election campaign, Macron repeatedly defended the traditional French drink, stressing that "the wine theme runs like a golden thread through the French literature, cinema and the collective consciousness" of France and "is part of the table layout in the French manner."

Hitting the Bottle: Wine Prices 'Will Have to Rise' as Frost, Fire Reduce Supply