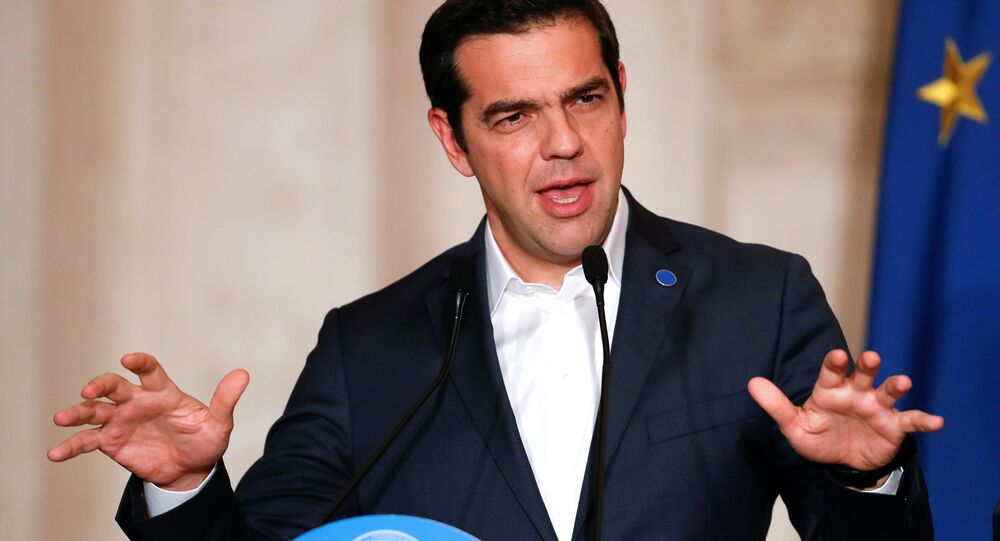 'Clean Exit' From Bailout Program Chance for Tsipras to Be the Man, Win Election

Eurozone finance ministers are meeting in Brussels on February 19 to discuss the third review of Greece's economic adjustment program. Whether Greece will request further financial backing or manage without it largely determines the fate of the ruling Syriza party.

The ruling Syriza party and its leader Prime Minister Alexis Tsipras are politically cornered by the economic gamble at hand.

On one side, it was Syriza who promised to put an end to austerity measures when they came to power in 2015, but have since signed up to a new bailout. The left-wing party would welcome the chance to pass on requesting precautionary credit line from the European Stability Mechanism (ESM), thus demonstrating ability to bottle up the ongoing economic crisis — all in time for the election due in 2019.

Meeting with European Commissioner for Economic and Financial Affairs, Pierre Moscovici, on the sidelines of the World Economic Forum. The completion of the third evaluation and bond yeilds, reflect the new era that the Greek economy has entered. #WEF18 pic.twitter.com/r2ddB0plBg

On the other, implementation of a precautionary credit line from the European Stability Mechanism would appease concerns of European creditors, as it would instil confidence in markets and investors.

However, for Syriza it would undermine Tsipras' effort to show the party can manage the country's finances safely and successfully. Extra pressure is applied by the main opposition party New Democracy, who in a recent poll left Syriza trailing 10 percent behind.

Discussing the possible outcomes for Greece, Dr. Vassilis Monastiriotis, professor of Political Economy at the London School of Economics, has told Sputnik in a recent interview that the agreement to follow the completion of the third exit program is likely to entail continuation of supervision and monitoring by international institutions.

The ESM have provided Greece with financial assistance of up to €86 billion under the third economic adjustment program, which started on 19 August, 2015 and is scheduled to run until 20 August, 2018.

According to the European Council, "the overall aim of the program is to secure a return to sustainable economic growth in Greece." However, to achieve the yearned for target, Greeks had to bear the burden of unpopular measures — stringent spending cuts and increased taxes.

Klaus Regling, ESM Managing Director, commended Greece on the progress achieved but noted there is still work to be done.

"Greece has regained its competitiveness. Salaries and pensions have fallen by 20-40%. This lowers prices, and makes the country competitive again. The current account deficit is also falling: not only tourism is booming, exports are also rising. There is clearly sustainable progress. This year, growth is expected to come in at 2.5%," Regling told German newspaper Augsburger Allgemeine

#Greece is last country in an #ESM programme: still work to do, but there is also great progress — #Regling in interview

© Flickr / hom26
Portuguese to Vote in First Parliamentary Elections After Exiting Bailout
On February 1, Greek Finance Minister Euclid Tsakalotos said in an interview with a Greek TV station Alpha that Greece is expected to achieve a "fairly clean exit" from its adjustment program in August.

Rejection of the precautionary credit line by an economically distressed EU member is not unprecedented. Following three years of austerity measures Portugal managed to recover its economy and exit the bailout program in May 2014, without requesting a financial safety net from ESM.

Greece may not as strong as its Southern European fellow nation in terms of economic and fiscal reforms, but Syriza's political ambition just might fill in the gap, which could see Athens free itself from international assistance.

Portuguese to Vote in First Parliamentary Elections After Exiting Bailout

Police Use Tear Gas Against Protesters Outside Greek Parliament - Reports