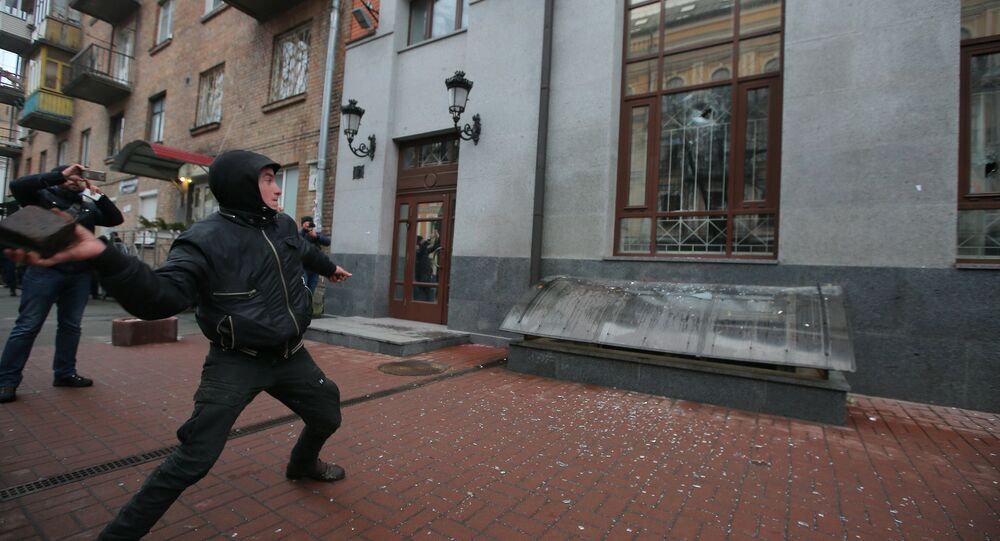 MOSCOW (Sputnik) - The Russian Embassy in Ukraine has expressed hope that Kiev will publicly condemn the actions of Ukrainian extremists that pelted the building of the Russian Center for Science and Culture in Kiev with stones and eggs.

“The nationalist elements have committed yet another action against the Russian Center of Science and Culture in Kiev… We have to admit with regret that our repeated appeals to bring the ragged hooligans to justice remain without due attention of the Ukrainian authorities. The radicals still exhibit unbridled behavior, feel their impunity, being sure that the actions of police will not follow. We expect that the Ukrainian side will publicly condemn this incident,” the embassy said in a statement on Sunday.

Фото facebook.com/c14news
WATCH: Security at Kiev Russian Cultural Center Decreased After Attack Warning
On Sunday, the hooligans of a neo-Nazi group, the Organization of Ukrainian nationalists, threw eggs and stones, while also breaking all the windows of the center, which belongs to Russian foreign cooperation agency Rossotrudnichestvo.

The incident takes one day after dozens of thugs from various radical organizations broke into the center and demanded the end of its operation in Ukraine.

The radicals caused significant material damage and threatened the staff and the guests with physical violence.

The Ukrainian police did not interfere with the actions of the extremists and did not detain any of them.

Following the attacks on the Russian center on Saturday, head of Rossotrudnichestvo Eleonora Mitrofanova said that Moscow would take all necessary measures via diplomatic channels.

Alexander Lukashevich, Russia's permanent envoy to the Organization for Security and Co-operation in Europe (OSCE), said Moscow expected the OSCE Special Monitoring Mission to react properly to the situation.