In January, Le Pen’s daughter and current FN leader Marine Le Pen, who had repeatedly called for reforming the party, said that this process should be accompanied with the change of the party’s name. Earlier in February, the head of the FN party's faction in the European Parliament told Sputnik that he had proposed "Resistance Nationale" (National Resistance) as the party's new name.

"Objectively speaking, this is a total absurd. Subjectively speaking, it is the betrayal of the movement’s history and the sacrifices, which its members have made over decades," Le Pen, who has recently been expelled from FN after a feud with his daughter, said in an interview with French weekly Journal du Dimanche.

Le Pen called on the FN party members to disapprove the reform during the upcoming congress in March, adding that he will attend the event.

In his interview, Le Pen also expressed regret that he had supported his daughter’s candidacy for the position of the party head in 2011. The politician also criticized the FN strategy during the 2017 French presidential race, and confessed that he was not maintaining relations with his daughter, though he was hoping for reconciliation with her.

In February, the court of appeal of the city of Versailles ruled to uphold the expulsion of Le Pen from FN party, which he founded and chaired for more than 40 years. The court allowed Le Pen however to maintain his position as honorary president of the party, as he has been doing since August 2015. 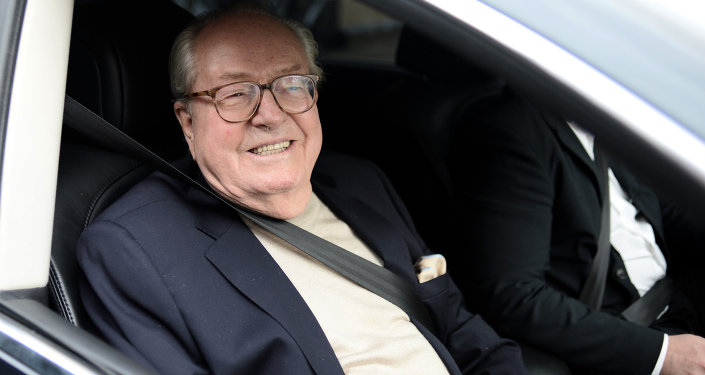 © AFP 2019 / STEPHANE DE SAKUTIN
French Court Confirms Exclusion of Founder Jean-Marie Le Pen from National Front
The conflict between Le Pen, 89, who has been a symbol of the French far right for decades, and the FN escalated in 2015, after his repeated anti-Semitic remarks.

Marine Le Pen, who came second in the 2017 French presidential election, has been trying to move away from the harsh statements of Jean-Marie Le Pen toward a softer political line.

The FN party advocates the struggle against illegal immigration, opposes French EU membership, and supports protectionism and traditional values among other issues.