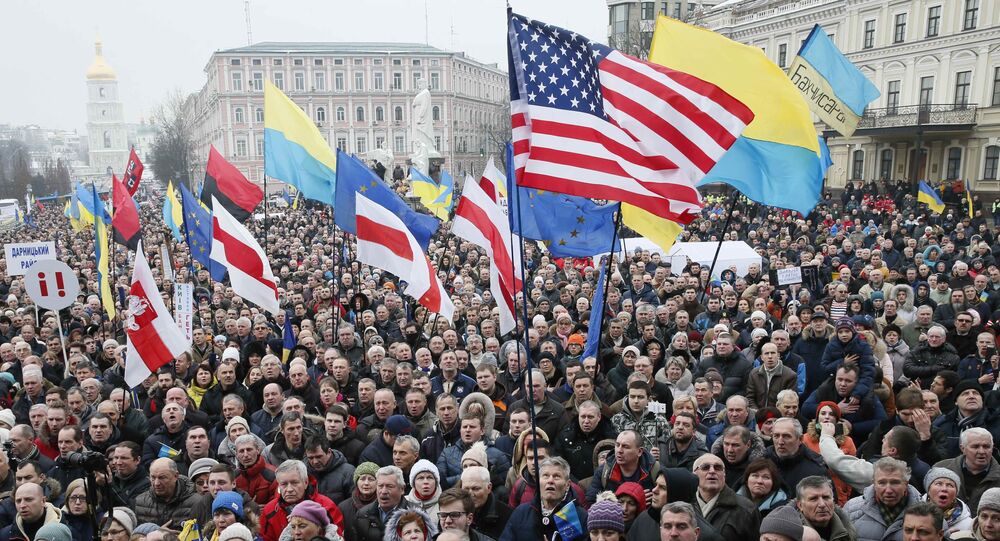 KIEV (Sputnik) – Thousands of supporters of Mikheil Saakashvili, the former Georgian president and an opposition figure in Ukraine, are holding a march in central Kiev demanding the impeachment of Ukraine’s President Petro Poroshenko, a Sputnik correspondent reported on Sunday.

According to the assessments of police, which has been ensuring public security during the rally, the march has gathered several thousand individuals.

The rally was expected to start at noon local time (10:00 GMT), however it has been delayed by 50 minutes. The organizers of the march cited the delays of public transport operation in Ukraine, preventing the rally participants from arriving in central Kiev on time.

Reports that up to 9 metro stations have been closed in central #Kyiv to prevent demonstrators joining the impeachment march. #Ukraine

Saakashvili is not attending the march since he was deported by the Ukrainian authorities to Poland on Monday.

The march is headed by the members of Saakashvili’s Movement of New Forces party.

The rally's participants are also demanding the snap election to the Ukrainian parliament and forming the new government.

The march’s bill reads that the parliament should include "300 new lawmakers, who will be independent from any political forces and oligarchs, with one year term of office."

Individuals, holding plastic boxes for collecting money in support of Saakashvili, are moving among the protesters.

After marching along Kiev’s central Volodymyrska street to Mykhailivska Square, the group started a congress, referred to in Ukraine as veche, in support of Poroshenko’s resignation.

The situation in central Kiev is calm.

Big turnout for #Kyiv anti-Poroshenko demonstration, in spite of closure of nearby metro stations. #Saakashvili supporters out but driving force. pic.twitter.com/TTPP12SCNw

Sunday marks the fourth anniversary of the February 2014 violent clashes between protesters and law enforcement in Kiev, commonly referred to as the Euromaidan, after which Poroshenko came to power.

© REUTERS / Valentyn Ogirenko
Ukrainian Nationalists Reportedly Attack Russian Cultural Center in Kiev
In July, Saakashvili was stripped of his Ukrainian citizenship while he was visiting the United States, after it was revealed that that he had provided incorrect information on his citizenship application. According to Ukrainian media reports, Saakashvili had covered up his criminal record in Georgia, where he faces various charges, including embezzlement.