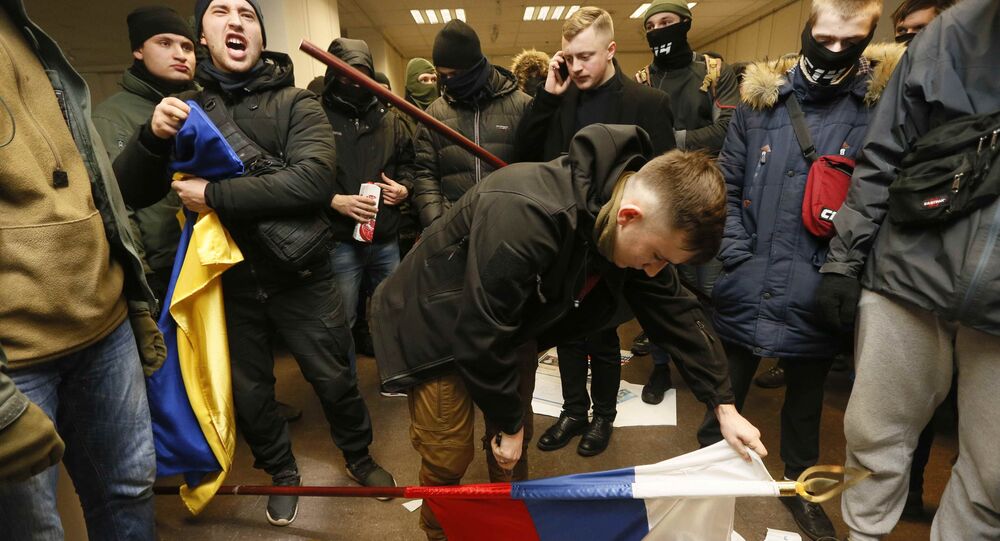 The development comes as on Saturday Russia's permanent envoy to the Organization for Security and Co-operation in Europe (OSCE) said that the Organization of Ukrainian Nationalists (OUN) planned to set ablaze the building of the Russian Center for Science and Culture in the Ukrainian capital.

The building of the Russian Cultural Center in Kiev was seriously damaged as a result of the attack of the nationalists, the head of the center Eleonora Mitrofanova said as cited by russian media.

According to her, windows were broken and the building was covered with paint.

"People were not injured," she noted, adding that nobody was in the building since yesterday.

© AFP 2020 / Sergei SUPINSKY
Ukraine Puts Eurovision Above Celebrating Victory Over Nazi Germany
She noted that necessary measures in connection with the incident had already been taken in cooperation with the Russian Foreign Ministry.

Earlier, activists of nationalist organizations showered the building of the Russian Center for Science and Culture in the Ukrainian capital with stones. In addition, during the march of nationalists, glass was windows in the offices of Sberbank and Alfa Bank were broken.

Members of the "Organization of Ukrainian Nationalists" movement have smashed the windows and doors of Russian bank Sberbank in #Kyiv's Podil neighborhood. pic.twitter.com/EdoUs2mIUK

READ MORE: Lavrov Talks on Rise of Neo-Nazism in Ukraine With Canadian FM

This is not the first such incident in Kiev in recent days. On February 17, nationalists tore the Russian flag from the building of the Cultural Center and burned it.