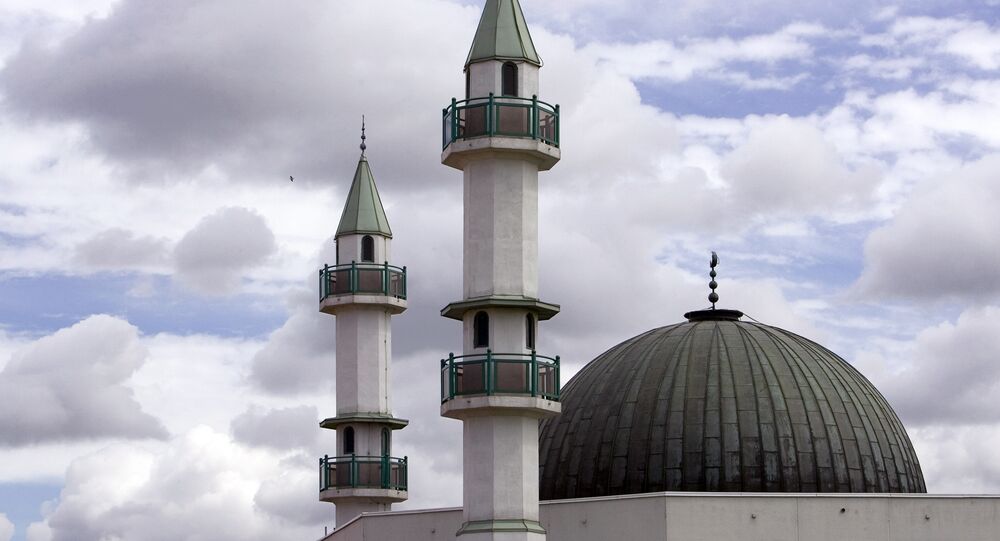 A local imam stressed that Muslims are "not visitors" and live permanently in the Nordic country, venturing that three-minute calls aired through loudspeakers every Friday would contribute to better integration.

The Muslim Foundation in the city of Växjö seeks permission for prayer calls and has filed an application with the local police, Swedish national broadcaster SVT reported. According to the foundation, minaret calls will only benefit integration work in the city.

According to the application, the prayer call will be held on a weekly basis from a temporary mosque in Växjö's immigrant-heavy district of Araby.

"I believe it's good for integration. This will serve as a confirmation of religious freedom. Muslims are not visiting here in Växjö, we live here," imam Abu Helal told SVT, suggesting that it would enrich Swedish culture.

© CC BY 3.0 / Jorchr / Mariakyrkan
Outrage Over 'Allahu Akbar' Sprayed on Swedish Church (PHOTOS)
According to Helal, minaret calls will have a positive effect on Växjö and make the city's ever-growing Muslim community feel more at home. Helal stressed that Muslims must be proud of their culture and shouldn't be hiding. Although he envisaged some sort of skepticism and opposition from Swedes at the beginning, he was positive that it will only do the city good in the long run. Helal also voiced plans to build a permanent mosque to cater to his community's needs, Swedish Radio reported.

Pia Ringius of the Växjö police, who is handling the case, cannot currently say whether permission will be granted. First, the Environment and Health Protection Committee will have a say on this matter, whereupon the police will investigate concomitant security risks. While this is the first case of its kind in the province of Småland, Ringius pointed out that a similar permission had been previously granted in Stockholm.

Växjö environment and health protection inspector Henrik Ohlin said that noise level and frequencies will now be checked to judge whether the prayer call implies health hazards for the locals. However, he stressed that the investigation will only deal with noise levels, totally disregarding the content of the message.

"We don't make a difference whether it's a prayer call or an ice cream car," Ohlin told Swedish Radio.

Växjö municipality council Anna Tenje of the Conservative Party, however, argued that the public discussion on the issue was likely to tear the community apart. Tenje suggested that complicated matters such as this will incite a lot of emotion.

"Basically, I am in favor for freedom of expression and freedom of religion. But I believe that such issues rather polarize society and risk aggravating existing conflicts rather than contributing positively to integration," Tenje told Swedish Radio.

Växjö is a city of 66,000 inhabitants in the Kronoberg County. It is the seat of the eponymous municipality, its administrative, cultural and industrial center, as well as the episcopal see of the Diocese of Växjö. More than half of the population of the aforementioned Araby district is foreign-born.

The Muslim Foundation of Växjö has existed for more than three decades, and is one of the oldest of its kind in the region.