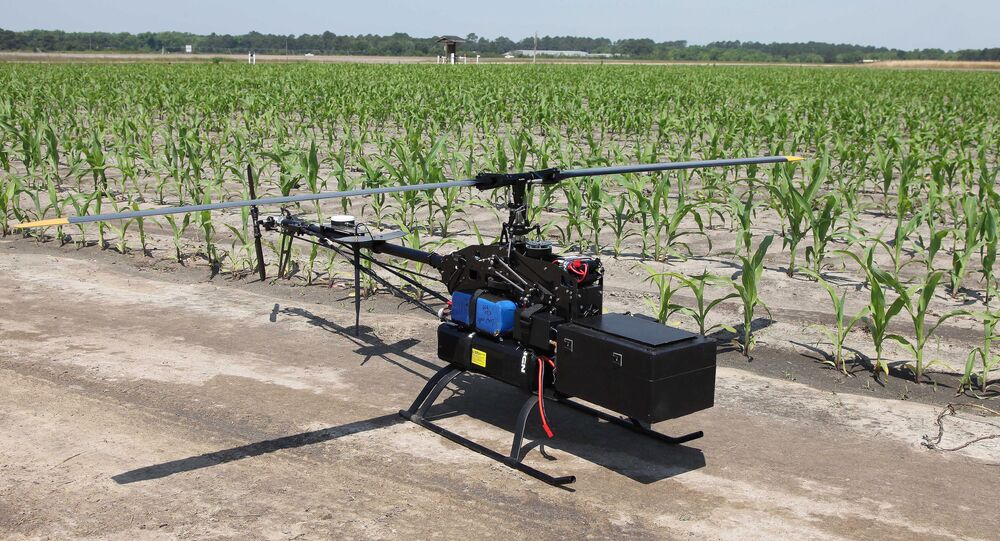 Old fashioned farming methods are being revolutionized by robotic technology and Artificial Intelligence (AI), however, it remains unknown how Britain will be able to fund future research after Brexit.

"Technologies are colliding" in the agricultural industry, robotics expert and author Chris Middleton told Sputnik, who says old fashioned farming methods are being improved by technology and Artificial Intelligence (AI), not hampered.

"Lots of farms are investing in drones and sensors and smart tractors to increase the yield on their land and gather data from sensors in the ground to send tractors to those areas," Middleton explains.

For example, Arable Mark is an all-in-one weather and crop monitor which runs on solar power, gathering data across 40 different data streams including rainfall, crop water demand, water stress and chlorophyll. Each unit is equipped with Wi-Fi and Bluetooth to send data to farmers to process the information.

"It's about how AI helps humans be smarter and more efficient rather than sweeping people aside," Middleton told Sputnik.

Recent research published by accountancy firm PwC predicts between 15 to 30 percent of skilled agricultural work will be at risk of being taken over by robots.

Some technology firms are already developing robots to pick fruit to offset potential labour shortages and are cultivating vertical crops in city warehouses.We have a BIG announcement coming to you tomorrow! Tune in at noon to hear #AeroFarms CEO David Rosenberg share this exciting news. #agtech pic.twitter.com/73fyRvFz2V

"Creating ultra healthy crops, grown where the mouths need feeding the most without being genetically modified and without using chemicals is a smart idea," Chris Middleton told Sputnik.

In Australia, the Ladybird and RIPPA prototype robot collects crop data and estimates quality, yield and works out the best time to harvest them.

These robotic technologies, developed by the Australian Center for Field Robotics (ACFR) and reported by Queensland Country Life, could revolutionise grain farming, according to scientist Mark Calleija,

"It has the ability to use camera imagery and deep learning detection algorithms to identify weeds and use a steel tine to disrupt the weeds, amongst many other functions," Mark Calleija told reporters.

SwagBot, is a cattle farming robot that can navigate across farmland, spraying weeds and collecting soil samples from programmed locations.

The European Institute of Innovation & Technology (EIT) will select 40 agri-food start up firms an opportunity to be mentored for fourth months. The selected start-ups will be given access to the latest food technology methods and academics. At the end of the program, the best three start-ups from Germany, Switzerland, Israel and the UK will be awarded 180,000 euros.

But how AI and the robotics industry will be funded and supported in Britain once the UK leaves the European Union remains unknown, according to Chris Middleton, 85 percent of the current funding comes directly from the European Union.

"I'm not aware of any strategy in place to replace that funding" Middleton told Sputnik. "The question remains where it will come from once we leave Europe."

#Japan leading the way with #robotics, #MachineLearning as well as #drones application for #farming. If some of this succeeds @ commercial scale in seeding watering and fertilizing the farm with less human labour it's productivity could mean no jobs for farmhands beyond Japan.

READ MORE: UK at a Crossroads Over Future Trading Routes

UK to Have $2.9 Bln More to Spend on Farming, Insurance Outside EU