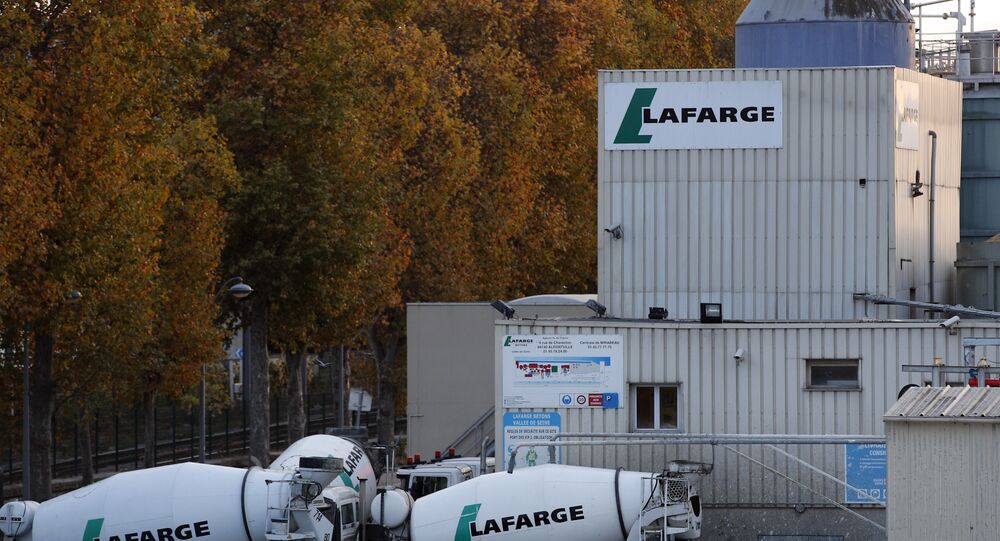 The French-Swiss multinational cement company has been under investigation since June 2016, when Le Monde wrote that the plant in north-eastern Syria indirectly financed Daesh (ISIS) between spring 2013 and autumn 2014.

According to Le Parisien, several top officials have claimed that the French Ministry for Foreign Affairs encouraged LafargeHolcim to keep the plant in Jalabiya running despite the civil war in Syria, which was accomplished by paying “taxes” to numerous armed terrorist entities, headed by Daesh. The new revelations have prompted fresh scrutiny from investigators.

According to the report submitted by the accounting firm PricewaterhouseCoopers (PwC), Lafarge paid 12.9 million euros to a number of local factions in Syria, between July 2012 and September 2014. A large portion of the payments was allocated to ensure the safety of the plant and the staff.

All the diplomats who’ve testified during the ongoing investigation have denied the fact that they encouraged the company to continue operating in Syria. On January 9, Lafarge’s former Syria director Christian Herrault was questioned by investigators in the presence of Eric Chevallier who served as France’s ambassador to Syria between 2009 and 2014. While Herrault claimed that he had met Chevallier several times, saying that he knew about the “shakedown,” and encouraged him to stay because those “problems” wouldn’t last long, Chevallier said that he did not recall those meetings.

Moreover, investigators have allegedly discovered a report by Herrault on the situation in Syria from 2012 to 2015, where he writes: "We have always been urged to stay (and) the only worry expressed (by French authorities) was not to do anything that might 'annoy' the Turks."

Chevallier dismissed the report as a “complete lie,” saying the Foreign Ministry had urged French businesses to leave Syria when the war broke out in 2012.

Sherpa, an NGO, representing a dozen  former Syrian employees has called on judges to question Laurent Fabius, former French foreign minister between 2012 and 2016.

"They tell us that Lafarge was never brought up with him. But it's astonishing that he wouldn't have paid attention to the only French company working in a strategic country," said Solange Doumic, Herrault’s lawyer.

Meanwhile, a foreign ministry source told AFP that it “had not been accused in any way” as part of the investigation.

"No collusion with terrorist groups is condoned in any form, in Syria or anywhere else in the world," the source said.

In March 2017, the company admitted that it had funded militants to work out arrangements “in order to maintain operations and ensure safe passage of employees and supplies to and from the plant.” The board paid “taxes” to Daesh until the plant was shut down in Syria in September 2014.