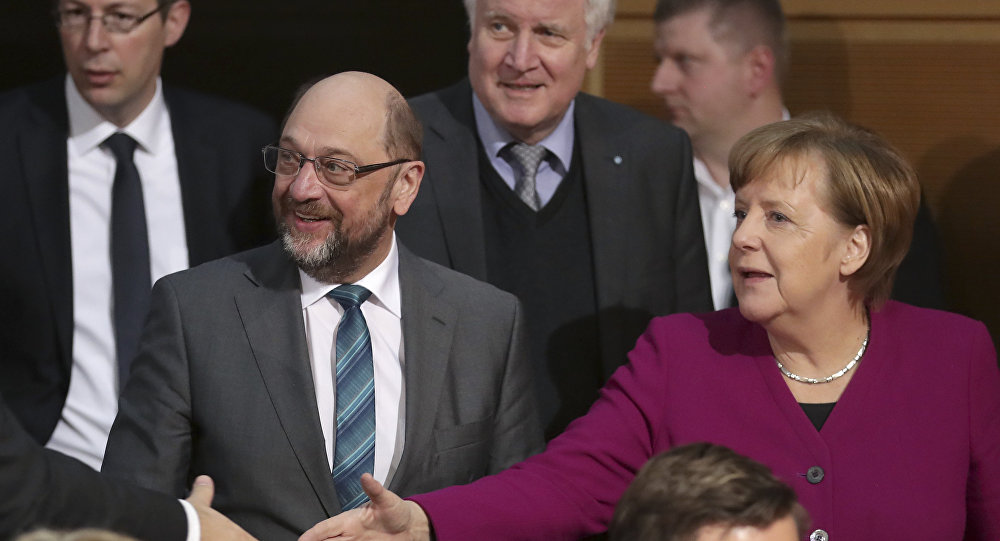 German Chancellor Angela Merkel noted that she was concerned about “tough hours ahead” as she and rival political parties in the northern European nation struggle to form a coalition government.

© AP Photo / Michael Sohn
Pursuit of Nationalist Solutions Can Make It Harder for Countries to Communicate - Merkel
Although German Chancellor Angela Merkel asserted her "good will" alongside an "expectation that there will be tough hours of talks ahead," negotiations are ongoing as the four-time world leader's Christian Democratic Union (CDU) wrangles with rival Social Democratic Party (SPD) to arrive at a consensus that will allow them to govern in Berlin.

"We will have to negotiate very, very intensively today" agreed SPD head Martin Schulz, who suggested that talks could drag on "until late in the evening or the night."

At issue are many hot-button subjects, including social policy points like labor law, health care reform and housing, according to the South China Morning Post (SCMP).

Schulz also drew attention to the urgent need for a "dependable coalition agreement that achieves consensus" resulting in the image, at least, of a stable government, cited by SCMP.

Almost half a year after both parties took a beating in general elections, leaders hope to cement agreements tonight, but have hedged their bets by suggesting that talks may continue into Monday or Tuesday.

Germany's government has been essentially immobile — particularly regarding urgent issues including European Union reform — since the September 2017 elections saw voters' deeply-held beliefs on immigration and economic reform cause a sharp drop in popularity for both the CDU and the SPD.

Economic and military partners have been watching impatiently as the two prominent German political parties bicker for advantage, both fearing a resurgence of the country's nationalistic far-right.

Merkel's conservative supporters complain that she is leading the CDU too far into the political center, as the Berlin press senses the end of an era for the chancellor's reign.

Implementing racism, xenophobia and conspiracy theories, Germany's far-fight AfD party has now gained entry into parliament, and its rise has resulted, in part, in the unlikely alliance of the CDU and SPD.

The struggle in Berlin to form a government has resulted in allies looking to Paris and its youthful President Emmanuel Macron to lead the European economic and cultural bloc.