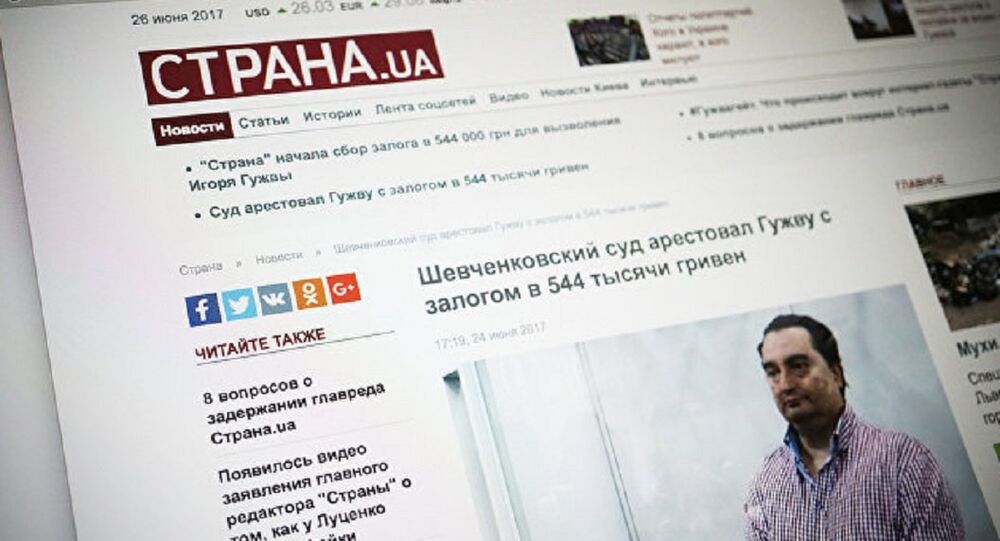 "We would like to inform [you] that Igor Guzhva left for Vienna and asked the Austrian Republic's authorities for political asylum, in accordance with established procedure," a statement on the website reads.

© CC BY 2.0 / Juanedc / Ukraine Security Service
IFJ Slams Ukraine Over Expulsion of Russian Journalist
The statement underscores that Guzhva remains the website's chief editor and will continue to control the website from outside the country, according to Russian news website RBC.ru.

In his address to readers, Guzhva said that he had to flee because of "unprecedented pressure from the government."

"Let alone constant threats of physical violence that both I and our journalists keep receiving. We turned to law enforcement with this, demanding a criminal investigation, but there was zero reaction. The last message with a death threat I received literally last weekend," Guzhva wrote in his address.

According to Guzhva, he has information that judges in Ukrainian courts received an order to find him guilty on all cases he was ever involved in, "including the fabricated case on extortion. There is an order that came down from the top — seven years of prison," he noted. He also says Ukrainian law enforcement, including the prosecutor's office and the Security Service, have been ordered to "activate fabrication of other cases" against him.

"In other words, in Ukraine, I cannot count on a fair court, on protection of my rights and freedoms, of my life," Guzhva says.

He believes the authorities' actions aim to change the editorial policy of the website. He accuses Oleksandr Turchynov, secretary of the National Security and Defence Council of Ukraine; and Sergey Bilyan, head of tax police, of fabricating cases against him, saying the two acted "by the hands of [leader of Radical Party of Ukraine Oleh] Lyashko."

​Guzhva says he fled the country legally, saying he chose Austria because it is neutral and is not a member of any military or political bloc.

On June 22, 2017, Guzhva was detained on allegations of extortion of money in exchange for not publishing compromising materials against an acting Ukrainian politician. Four days later he was released on roughly $21,000 bail.

Ukraine under President Petro Poroshenko has a lengthy history of journalist murders. In 2015, another reporter, Oles Buzina, also mentioned attacks and threats against him in an interview with Rossiyskaya Gazeta — he was murdered one month later.

On July 2016, Pavel Sheremet, a Belorussian, Russian and Ukrainian journalist, was killed in a car explosion. According to friends and relatives, both he and his wife complained about being watched and followed.