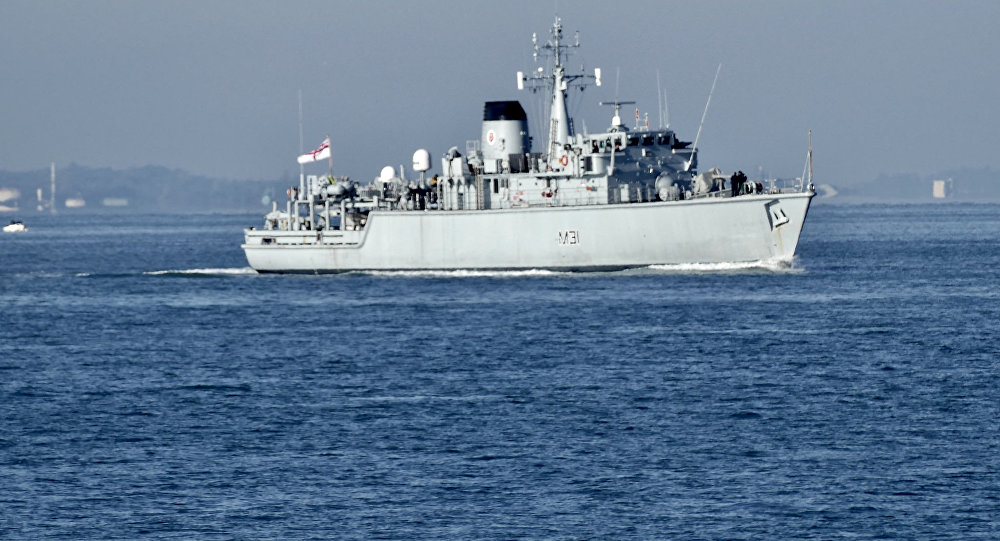 A trio of Russian naval vessels sailing through the international waters of the English Channel prompted Britain to send one of the deadliest vessels at its disposal – a mine countermeasures ship with a plastic hull.

Last year the British Navy deployed a minehunter to follow the movements of Russian warships in international waters, and then attempted to keep the information about this deployment secret, the Daily Mail reports.

In August 2017, a Russian support ship and two Kilo-class attack submarines navigating the English Channel were tailed by HMS Cattistock – a vessel more suited for dealing with mines than tracking foreign military vessels.

HMS Cattistock is a Hunt-class mine countermeasures vessel armed with one 30mm gun, two miniguns and 3 mounted machineguns; the hull of the vessel is made of Glass Reinforced Plastic which helps conceal the ship’s presence from sea mines.

© AP Photo / Desmond Boylan
Deja Vu: US Media Alarmed by a 'Russian Spy Ship' in Int'l Waters, Again
According to defense sources cited by the newspaper, it was the first time that the Royal Navy had to deploy a lightly-armed minehunter on such a mission.

"We were so short on ships we had to send a mine-hunter," one of them said.

"This hardly shows we have the capability to counter what we could have against us," he said, adding that the situation shows the UK’s apparent lack of assets and is "quite worrying."

A Royal Navy spokesperson however insisted that "HMS Cattistock was the most appropriate vessel for this particular task at that time."

The newspaper also points out that while normally the British Ministry of Defense publishes details of Royal Navy ships escorting Russian vessels near the UK shores, this time the department actually blocked attempts to make the details of this deployment public.

Many Daily Mail readers however pointed out that the Russian vessels escorted by HMS Cattistock were actually sailing in international waters, and wondered aloud why a British warship had to be sent to "intercept" them in the first place.

"To intercept two subs and a support ship"? We can't intercept" ANYTHING in the Channel. It's international waters so ANY vessels can use it. Why do we keep reading these nonsense stories?” echoed ‘urmondjohn’.