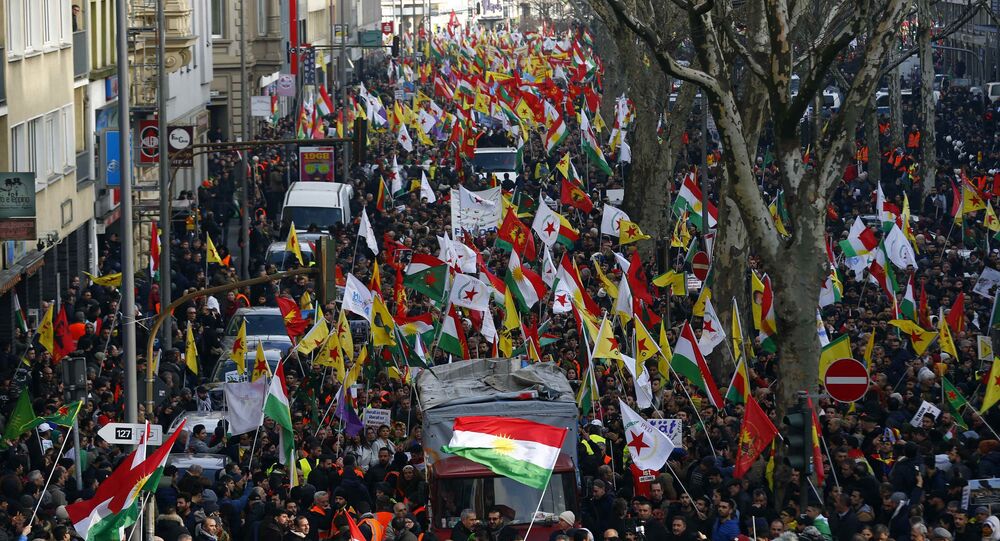 The military offensive by the Turkish Armed Forces in the Kurdish-dominated Syrian city of Afrin, launched on January 20, has triggered public outcry among members of international community and Kurdish diaspora around the world.

About 7,000 Kurdish immigrants took to streets in the German city of Cologne, which is home to a large Kurdish community, protesting against the Turkish military operation in Syria dubbed Olive Branch, the German DPA news agency reported.

Happening now in Cologne/Germany: Thousands of Kurds and their friends are condemning the Turkish attacks on Kurdish Afrin #DefendAfrin pic.twitter.com/MS0IO0NTyF

According to the media outlet, around 20,000 are expected to participate in the rally Saturday afternoon.

Pro-Kurdish people protest against the Turkish offensive in Afrin of northwest Syria during a demonstration in Cologne, Germany, January 27, 2018
Turkey's #OperationOliveBranch vs. #OliveBranchOfPeace #AfrinNotAlone pic.twitter.com/LOmo2KdGw8

The local police forces have enhanced security, preparing for the demonstration, forecasting potential clashes between Kurdish and Turkish immigrants, as the latter support Ankara's move.

Turkey launched its military operation in Syria on January 20, soon after the US announcement of their decision to start training the new "Border Defense Forces," comprising the Syrian Democratic Forces (SDF) and the Kurdish YPG militias, allegedly affiliated with the Kurdistan Workers' Party (PKK), which is designated a terrorist group by Turkey and several other countries.

Explaining the advance by the necessity for the country to protect its borders from a "terrorist army," Turkish President Recep Tayyip Erdogan had vowed to extend operation to other Kurdish-populated areas of Syria, such as Manbij, moving throughout our entire border.

However, Turkey has repeatedly underlined that the operation was not aimed against the Syrian government, calling the territorial integrity of Syria its mutual goal with Damascus.