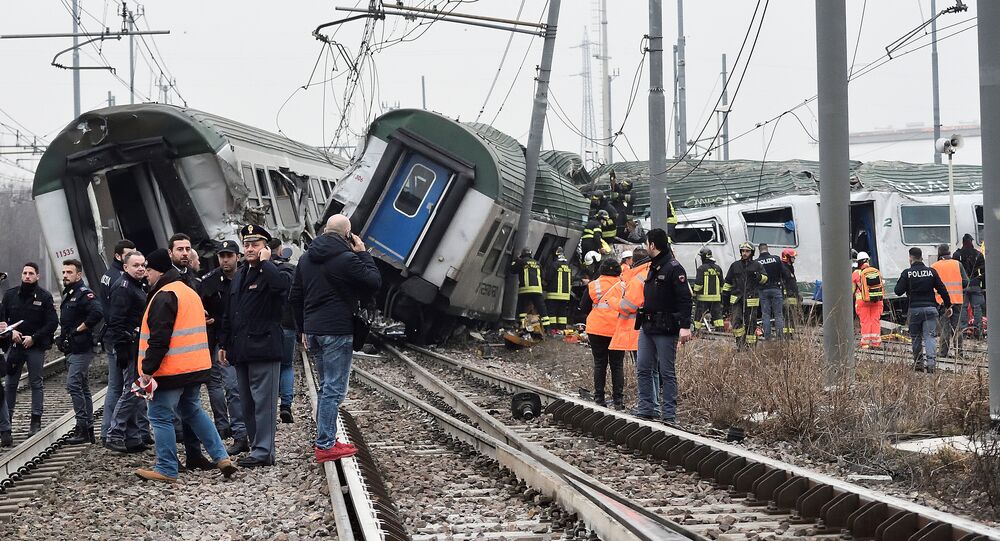 The reason for the train crash is as yet unknown. The incident took place during the rush-hour.

At least 2 people have been killed and 10 others hospitalized in serious condition in a train crash near Italy's Milan, according to Rainews24 TV channel.

The train heading from Cremona to Milan derailed between Milan and Venice on Thursday morning, the Trenord railway company told Sputnik.

Ambulances and rescuers have arrived at the scene in the vicinity of the town of Pioltello. Local authorities have announced delays in train services.

The broadcaster added that up to 100 people received minor injuries, all of whom are the train's passengers.

2 died, 10 injuries in serious condition and 100+ light injuried in the train derailment in the suburbs of #Milan. #Milano #Italy #Trenord #pioltello pic.twitter.com/ypGUmJkHFX

The Italian broadcaster showed footage from the site, on which heavily damaged overturned train cars could be seen.

Two people have died and a hundred have been injured, ten of them are in critical condition after a train derailed when entering Milan. Other ten are in serious condition, but not critical.

The incident took place during rush-hour, halting train traffic into and out of Italy's financial capital for hours.

Trenord, the regional train company serving the Lombardy region, has been criticized over frequent delays and other problems.

The latest such incident took place in 2016, when 23 people were killed after two trains collided on a single track in an olive grove in Puglia, southeastern Italy.