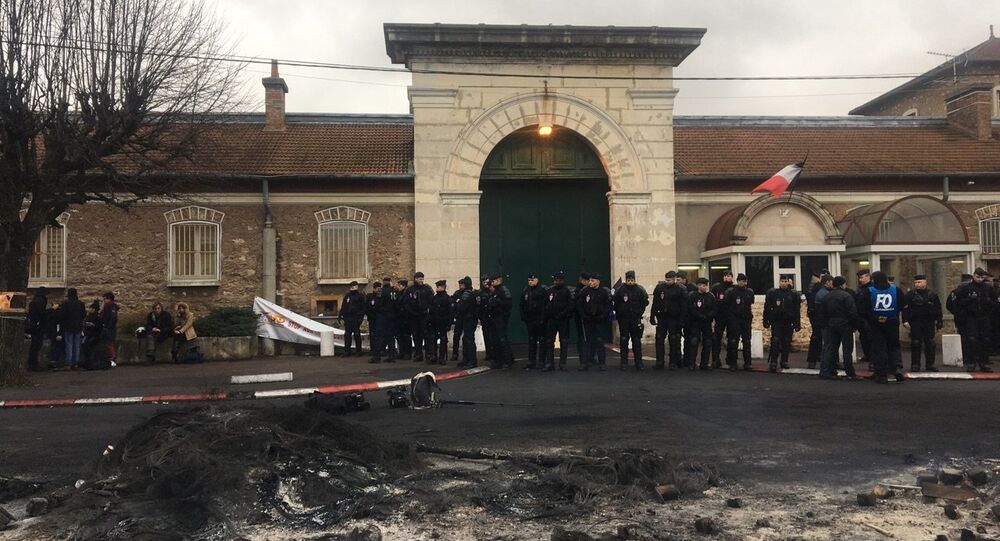 Jawad Bendaoud, who is due to appear in court later in the day, faces up to six years in prison if convicted.

The Fresnes prison administration said as quoted by AFP that Jawad Bendaoud, the alleged fellow conspirator of November 2015 Paris terrorist attacks, has been transferred to the French capital for long-awaited trial, which is due to start later in the day.

Earlier in the day, police have managed to completely clear access to the prison after French guards had blocked access to it to demand better working conditions, threatening to disrupt the first trial related to the deadly 2015 terrorist attacks in Paris, clamed by Daesh.

Bendaoud, who is due to appear in court later in the day, has been accused of renting his apartment to the suspected terror ringleader Abdelhamid Abaaoud and two co-plotters, thus, helping them hide from police when they were the most wanted men in France. According to Bendaoud, he allegedly didn't know that the people were wanted extremists. He faces up to six years in prison if convicted.

In the upcoming trial, the man is set to be joined by two other suspects: Mohamed Soumah, accused of acting as an intermediary with Bendaoud to find lodging for the two fugitives, and Youssef Ait-Boulahcen, accused of being aware of their whereabouts and failing to inform the French authorities.

On November 13, 2015, terrorists killed 130 people, and injured over 350 others in Paris, and the city's northern suburb of Saint-Denis in a series of coordinated attacks, which were characterized as "the first case of mass murder" in France. Since the 2015 attacks, the French authorities declared a state of emergency in the country, which has since then been prolonged six times and expired in early November.

However, on October 30, French President Emmanuel Macron signed into law the anti-terrorism legislation, bearing elements of the state of emergency, including the extension of the security services’ powers. The law has been criticized by many as compromising the rights and liberties of the French people.

The new anti-terrorism law has been adopted in France in the wake of the repeated terror attacks in the country.

Prison guards have been on strike in more than 100 French prisons because of clashes and attacks initiated by inmates, mainly "radicalized" Islamists," the latest of which happened on January 21, when two guards were attacked by an inmate in a prison in Pas-de-Calais. The prison workers received injuries and were hospitalized.

© Sputnik /
WATCH Clashes During Prison Workers' Four-Day Rage Against Islamist Violence
In order to settle the issue, French President Emmanuel Macron promised on the following day to renovate facilities and expand them to house an additional 15,000 inmates. French prison unions have rejected the proposals as insufficient, calling for such measures as specialized facilities for Islamist terrorists, as well as higher salaries.