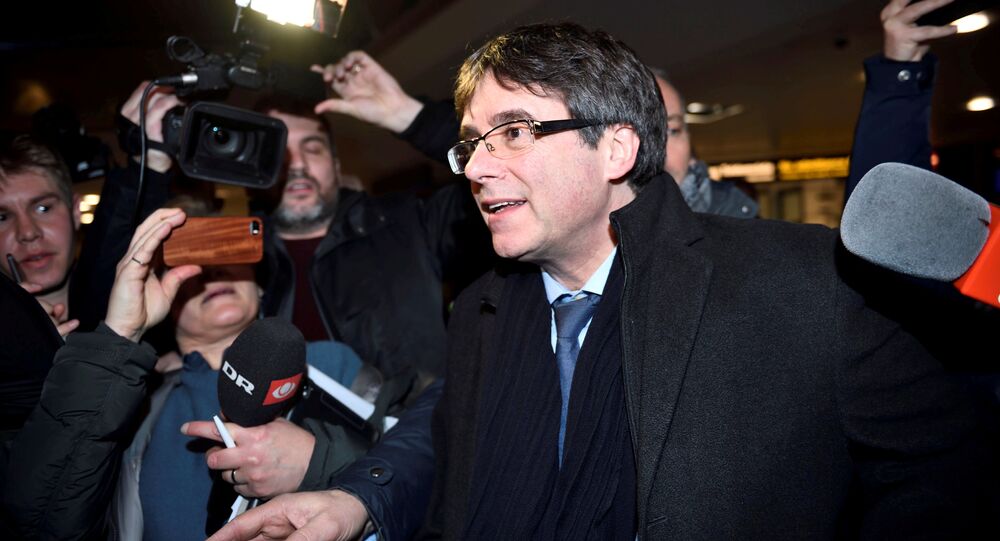 MADRID (Sputnik) - Catalan Parliament speaker Roger Torrent said Tuesday that he would propose former Catalan President Carles Puigdemont, who is in self-imposed exile in Belgium, for nomination as a candidate for the position of the head of the Catalan government, the Generalitat.

"I will propose Carles Puigdemont as a candidate for the position of head of government…. I understand the peculiarities of Mr. Puigdemont's personal and legal situation, but I also think that he has a legal right to be a candidate," Torrent, who represents the pro-independence Republican Left of Catalonia party, told a press conference.

The speaker added that he was planning to hold talks with both Spanish Prime Minister Mariano Rajoy and Puigdemont soon.

Earlier, Puigdemont's candidacy was offered to the speaker by the coalition "Together for Catalonia".Torrent also added that in the near future he intends to negotiate with both the chairman of the Spanish government, Mariano Rajoy and Puigdemont.

#Catalonia's Parliament Speaker @RogerTorrent: "The only presidential candidate with support is #Puigdemont. I have requested in a letter a meeting with #Spain's PM Rajoy to analyse the anomalous situation. And I want to see all the MPs who are in jail and in Brussels.
Incl. 📹 https://t.co/aXgg3Dwwik

On Monday, Puigdemont arrived in Copenhagen, the Spanish prosecutor's office asked the Supreme Court of the country to renew the European warrant for his arrest.

Lawyers representing the Catalan parliament have announced their conclusion that Puigdemont cannot be remotely approved for the post of head of the Catalan government using video conferencing, and that any candidate for this position should be present in person.