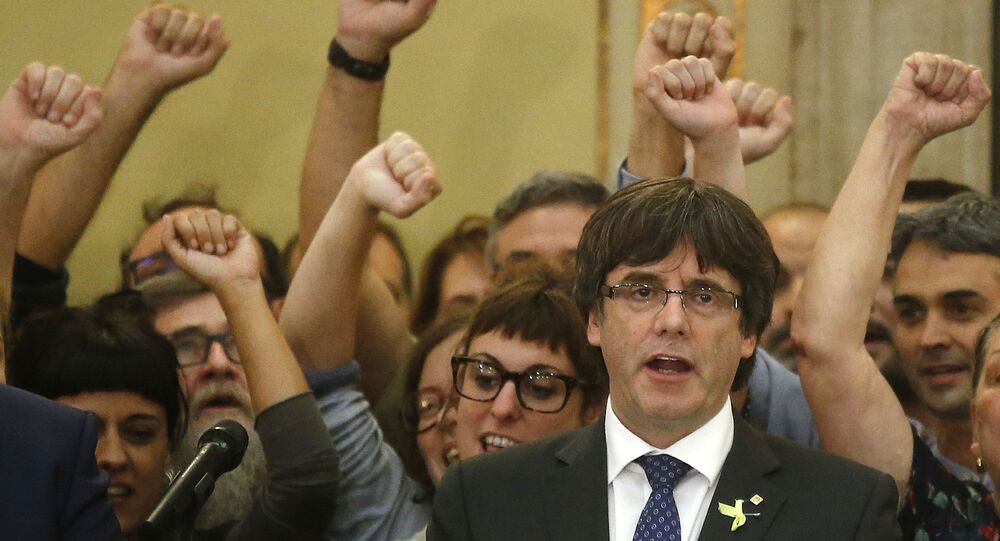 MADRID (Sputnik) – Catalonia's pro-independence parties do not consider any candidates for the leadership of the autonomous region, other than the government's former head Carles Puigdemont, who fled Spain after Madrid imposed direct rule over the region, Sergi Sabria, a member of the Republican Left of Catalonia (ERC) party said Wednesday.

"At the moment, Puigdemont is the candidate, we are not working on other options," Sabria told the Antena 3 broadcaster.

On Wednesday, the Catalan parliament held its first session after the snap election of December 21. Citizens, the party backing Catalonia as part of Spain, won 36 seats in the 135-seat parliament, more than any other party. Meanwhile, the three pro-independence parties combined, including Puigdemont's Junts per Catalunya, ERC and Popular Unity Candidacy won 70 seats. However, three of their lawmakers are in prison in Madrid and five more are currently in Brussels.

© Sputnik / Elena Shesternina
Catalan Pro-Independence Parties to Lose Majority in Regional Elections - Poll
According to the parliament's legal team, the lawmakers who are currently in Belgium may not transfer their responsibilities to other people, but no decision was made on those who are in prison. The lawyers in particular opposed the idea of Puigdemont assuming the leadership of the region via Skype, from Belgium.

Spanish Prime Minister Mariano Rajoy said that Madrid would maintain direct rule over Catalonia, introduced in late October after the region's unilateral declaration of independence, if supporters of independence attempted to re-elect Puigdemont.

The referendum on independence was held on October 1, despite the opposition of the central authorities.