The upcoming loan of the 11th-century artwork, which tells the story of the Norman conquest of England, is believed to symbolize the strength of the relations between France and the UK in the wake of the Brexit vote.

Emmanuel Macron will announce during his Thursday's UK visit for negotiations with Theresa May that the Bayeux Tapestry will be allowed to leave France for the first time in 950 years and be exhibited in the UK, the Times newspaper reported.

According to the media, the loan is likely to take place in about five years, whereas the location of the exhibition in England and other detailes are yet to be negotiated.

The French are to loan us the #BayeuxTapestry that’s nice of them pic.twitter.com/zHi7wULt3w 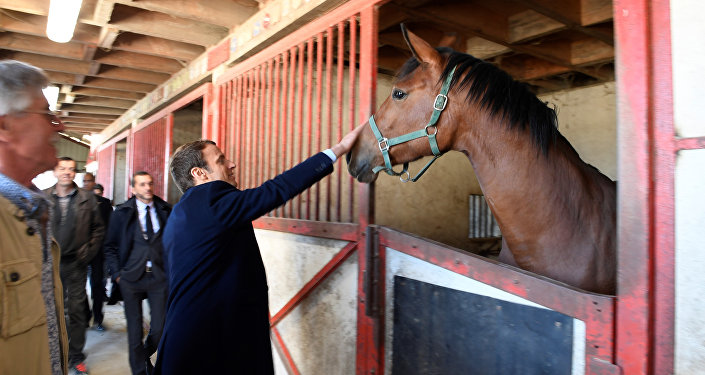 © AP Photo / Eric Feferberg/Pool
Macron Intends to Give Chinese President Horse as State Gift - Beijing
The tapestry is currently displayed in Bayeux, city in the northwestern French region of Normandy, and belongs to the national heritage of France. In 2007, UNESCO included the artwork in the "Memory of the World" register.

The tapestry is a linen cloth on which the invasion of England by William, Duke of Normandy, also known as William the Conqueror, and his victory over Harold, the Anglo-Saxon King, in the 1066 Battle of Hastings are embroidered. These events are believed to have changed the course of the history of England as it contributed to the establishment of firm links to Europe and Normandy as well as transformed the English language to its modern form.

Cartoonists like Peter Brookes are having a field day with the #BayeuxTapestry Here is another Frenchman aiming for an Englishman pic.twitter.com/m3CqAoyFfG

The artwork is also known as the "Tapestry of Queen Matilda" and is about 50 centimeters in width and 68 meters long. However, the final part of the tapestry is missing. Experts suggest that it depicted events after the Battle of Hastings, including the coronation of William the Conqueror to the English throne in 1066. It is thought that the tapestry was embroidered by court weavers at the order of Queen Matilda, the wife of William the Conqueror.

Ukraine to Deepen Cooperation in Security Field with France