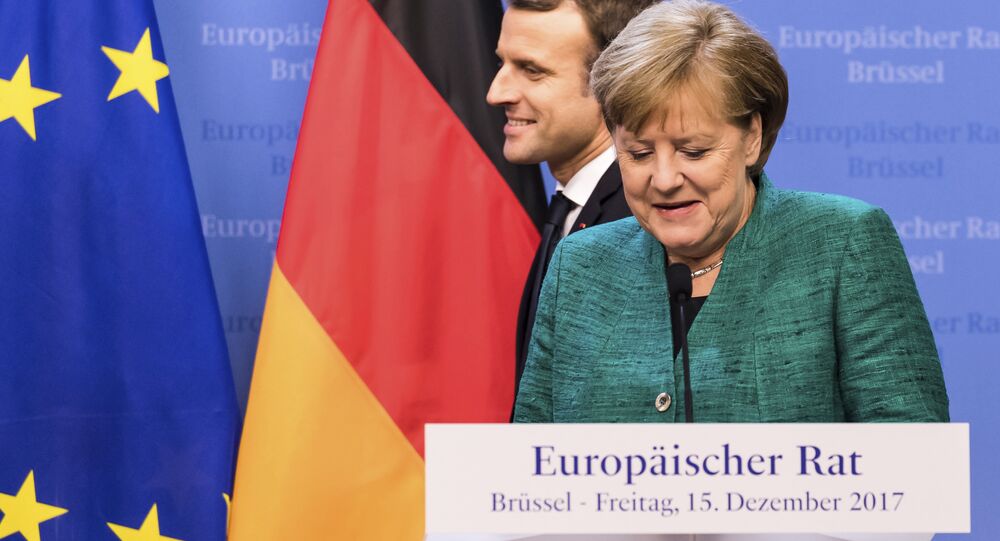 An appearance by the two together would be seen as a global counterbalance to Trump’s isolationist ‘America first’ political rhetoric.

© AP Photo / Alex Brandon
Macron Stressed Commitment to Iran Nuclear Deal in Conversation With Trump
Following a Friday announcement that German Chancellor Angela Merkel has forged a preliminary coalition agreement with center-left Social Democrats (SPD) in Berlin, officials have noted that the leader may travel to the World Economic Forum (WEF) in Davos, breaking a three-year moratorium on her attendance at the annual gathering of the world's political and financial power brokers.

After a fractious September 2017 election that saw her power base eroded, Merkel's Christian Democratic Union of Germany (CDU) party has struggled to find common ground with the various political parties operating in Berlin, and the coalition announcement brings much needed breathing space for the chancellor to turn to matters beyond simple governance, according to Reuters.

A Davos meeting between Merkel and French President Emmanuel Macron would be seen as a show of force against the policies, actions and statements of US President Donald Trump, who is also slated to speak at the event.

Merkel spokesman Steffen Seibert dodged questions last week as to whether the German leader would attend the January 23-26 WEF, but following what appears to be the beginnings of a political deal in Berlin between the CDU and the SPD, chances that she will attend have risen, according to Reuters.

Last year's WEF event in Davos saw Chinese President Xi Jinping touting the readiness of Beijing to fill what many consider to be a vacuum in global leadership following the inauguration of Trump, a strikingly polarizing figure on the US political stage.

Since that time Trump has made good on predictions of increased American isolationism, including pulling out of the Asian nation Trans-Pacific Partnership trade-deregulation deal, withdrawing from the 2015 Paris climate accords and attempting to destroy the historic 2015 Joint Comprehensive Plan of Action (JCPOA) agreement between Western powers and Iran to end Tehran's nuclear weapons ambitions.

Trump — the most unpopular president in US history — has escalated a war of words with DPRK leader Kim Jong Un, stirring fears of a nuclear conflict, and invited global condemnation by referring to Haiti and several African nations as "shithole countries," during a White House meeting with members of Congress.

The attendance of Merkel to stand with Macron at Davos would send a strong signal that Europe intends to lead, limiting the influence of Trump and his administration on the world stage.

"There are very few things in the world that unite countries as much as their antipathy towards Trump and what he is doing," stated Davos regular Ian Bremmer, president of political risk consultancy Eurasia Group.

"In the United States he may have 40 percent who approve of what he's doing," Bremmer opined, adding, "In the Davos crowd it is closer to 5 percent."

Trump's visit to the annual global power-broker conference will be the first by a US president since 2000. The US leader is expected to be accompanied by son-in-law Jared Kushner, US Treasury Secretary Steve Mnuchin and US Secretary of State Rex Tillerson, as well as by a large delegation of ancillary officials.

Welcomed by the Western media as the prominent defender of what Reuters describes as ‘liberal democratic values' following the victory of Trump, Merkel is joined by Macron, seen as a pro-European centrist who supports trade deregulation and a global order based on consensus rather than isolationism.

Standing together, the two will present a formidable front in any confrontation with Trump or the policies of his increasingly unfocused White House.

Macron is scheduled to speak at the WEF on January 24, and some expect him to grab the spotlight and hold it.

"My instinct tells me that Macron will go big," according to Chatham House think tank director Robin Niblett in London.

Macron "won't just talk about Europe," Niblett asserted, "he will try to take up the mantle of the free world under Europe's wing," cited by Reuters.

Joined by Merkel, now serving an unprecedented fourth term as Germany's leader, Macron's statements would be expected to resonate with increased force.