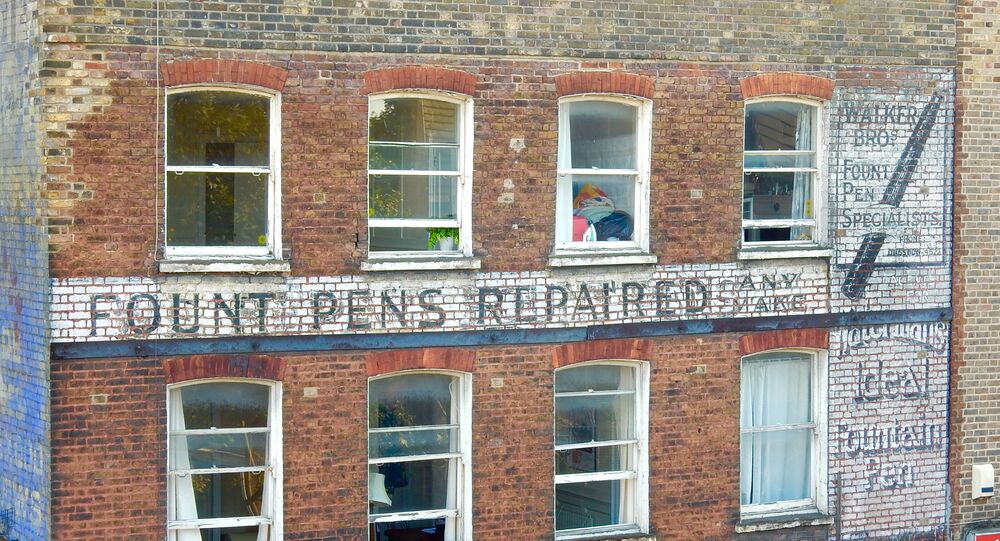 The Adverts That Won't Go Away: The Weird and Wonderful World of 'Ghost Signs'

All over the world there are advertising signs left over from a previous era. Sputnik spoke to Sam Roberts, founder of Ghost Signs, who takes tourists on guided tours around some of these sites in London.

Painted on the sides of old buildings, these signs advertise products from a bygone age, such as steamship cruises, fountain pens, pianos and snuff.

London is full of these signs and they provide a delicious echo of the past when Guinness was considered good for you and nobody had any idea that tobacco caused cancer.

Sam Roberts, who runs a website called Ghost Signs, has been photographing and cataloguing these adverts for several years and runs guided tours of London for tourists.

"They are beautiful, in a manner akin to autumn leaves, beauty revealed through decay. They have stories to tell and are windows into the past, exhibited in a very public way," Mr. Roberts told Sputnik.

​"In the same way that we revere architecture that represents particular eras, I think the same applies to these signs as relics of advertising past. They are also important at the local level, with many people in the community valuing them because of their role as place markers," he told Sputnik.

"Another aspect for me is that they serve to document craft history, the skill that went into painting them has been in steady decline, although it is now experiencing a resurgence. They are a valuable document of the intersection of advertising, craft and local history," Mr. Roberts told Sputnik.

Some have been given legal protection, like the 1920s fountain pen advert on a building in Stoke Newington which was recently listed by Hackney Council.

"They are largely subject to the whim of property owners, even where protections do exist, such as being locally listed in London. Policy differs in other parts of the world, with the US and Australia attaching more significance to this aspect of their commercial history. Belgium and the Netherlands are two countries closer to home that are doing a lot more to protect and preserve the signs," Mr. Roberts told Sputnik.

Mr. Roberts concentrates on London but he has catalogued ghost signs from as far away as Kenya, El Salvador, Cambodia and New Zealand.

He said he had used a variety of methods to research the ghost signs and had even produced an app for people who wanted to wander the streets and find out about a sign they had just walked past.

"The oldest sign that I know of in London are typically late Victorian (1870s) but there is one in Bath that has been dated to 200 years ago," Mr. Roberts told Sputnik.

Should Signs Be Repainted?

Some conservationists have suggested repainting or restoring the signs but Mr. Roberts said this was a controversial topic.

"One of the neatest solutions that I've come across is the use of light projections to show how the signs once looked, and I was fortunate to be able to collaborate with Light Capsules wizard Craig Winslow on a series of these in London," he told sputnik.

Mr. Roberts said his favorite sign was one for Black Cat cigarettes in Shoreditch, east London, which was sadly covered up in 2016 when the site was redeveloped.

Future of Advertising: New York Subway to be Packed End to End With Displays