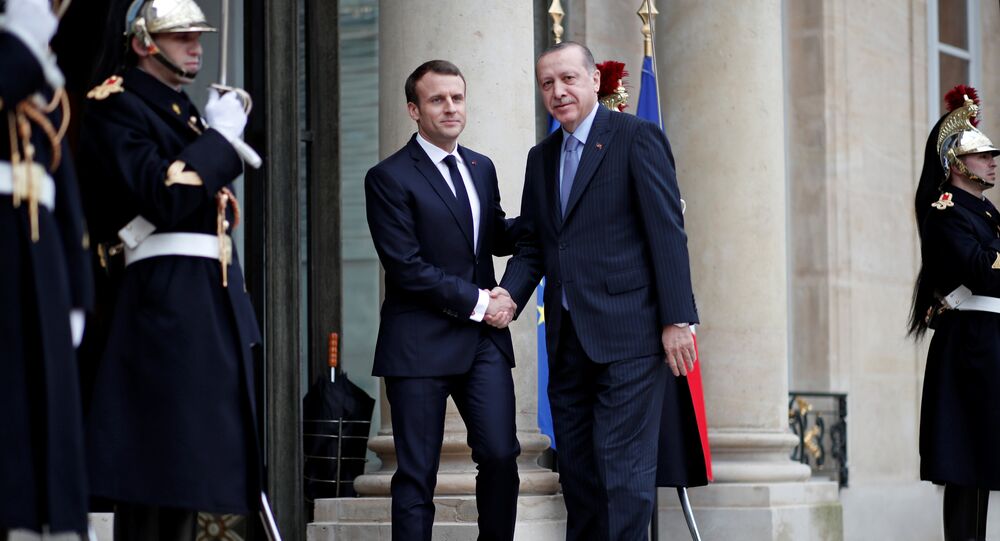 Turkish President Recep Tayyip Erdogan has arrived in France on his first official visit to the country since 2016, meeting with his French counterpart Emmanuel Macron on January 5. The reported agenda of the meeting includes the Turkey's relations with the EU, the conflicts in Syria and Iraq, as well as the issue of bilateral trade.

"Our democracies must be strong standing up to terrorism… But at the same time our democracies must completely protect the rule of law," Macron said in a joint news conference with Tayyip Erdogan after talks in Paris, in reference to the issue of imprisoned journalists which he vowed to raise prior to the talks.

Responding to Macron's stance, the Turkish president noted that terrorism did not create itself, calling columnists and opinion leaders "gardeners" of terrorism.

Before the meeting, on January 4, Special Advisor to the Turkish President Ibrahim Kalin slammed Macron's position on the issue, due to the latter's "lack of information on the issue" and announced that Erdogan would present some documents explaining in a "detailed" manner why the people detained are members of a terror group.

The discussion was to touch the fate of two French citizens detained in Turkey last year over terror charges: Mathias Depardon and Loup Bureau.

In total, about 151 journalists have been imprisoned in the country since July 2016, when a state of emergency was declared due to a failed coup attempt, according to the P24 press freedom group.

"Partnership" As Opposed to "Membership"

Speaking on Turkey's possible accession to the EU, long-cherished by Ankara, the French president has stated that the recent developments in the country do not allow it, adding that it would be deceptive to pretend new chapters in the joining talks could be opened.

"We have to look at whether we could rethink this relationship, not in the sense of integration, but, maybe, cooperation, a partnership with one purpose, to preserve the anchoring of Turkey and the Turkish people in Europe and ensure that its future is built looking at Europe and with Europe," Macron said at a televised joint press conference with his Turkish counterpart Recep Tayyip Erdogan.

"I am focusing on the bilateral relationship. Given the recent developments in Turkey, which I respect, because it's everyone's sovereignty, it is not moving forward in the sense of facilitation of the process," Macron said at the conference.

Erdogan has struck the blow aside by saying that waiting for membership in the European Union "exhausts" Turks.

"Ankara is not inclined toward constantly asking to become a EU member," the Turkish president said.

Countering the Turkish president's stance, Macron stated that the EU could offer Tukey "partnership" instead of membership.

The story of much-anticipated Turkey's accession to the EU dates back to 1963, when the country has signed EU Association agreement with the bloc. After that, the country reiterated its bid in 1987 by submitting a membership proposal. Formal talks on Turkey's accession to the bloc started in 2005. In March 2016, its candidature received a boost when it signed a migration deal with the European Union, but was suddenly derailed by EU objections regarding the Turkish government's clampdown in wake of the failed coup in July 2016.

The long "exhausting" wait prompted Erdogan to announce on March 25, 2017 that Turkey could hold a referendum to decide if they really even need to join the bloc — on the very day the EU was celebrating its 60th anniversary.

Recently, however, the Turkish president has resumed accession talks with renewed vigor, describing Germany's, Netherlands' and Belgium's governments as "old friends," stressing that their last contacts were "quite good," particularly over the Jerusalem issue.

French President Emmanuel Macron has touched upon the Syrian crisis, speaking about the Astana and Sochi processes on the Syrian conflict resolution.

"The Astana and Sochi processes were meaningful from the point of view of military de-escalation, I have said that to the president, [however], they, in my opinion, will not build the peace [in Syria] as they are politically biased," Macron said.

© AP Photo /
Battle for Syrian Town: Daesh Remnants 0, FSA Rebels 1
Syria has been in the state of civil war for more than six years, with the government forces fighting against numerous opposition groups and terrorist organizations.

The international community has taken a number of steps aimed at settling the crisis, including through negotiations in Geneva and Astana. The Sochi National Dialogue congress, bringing together a vast number of opposition and pro-governmental forces, as well as representatives of all Syrian ethnic and religious groups, will become the third format of talks on the regulation of the Syrian conflict.

It is planned to hold the congress in Sochi on January 29-30, 2018, with a special preparatory meeting for the forum taking place on January 19-20.