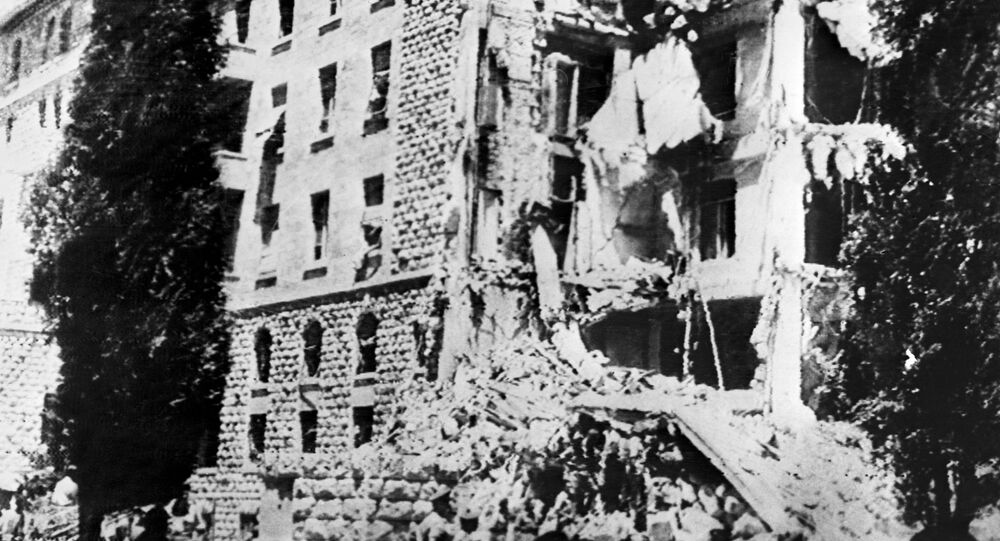 The newly declassified files center around the terrorist activities of two young militants who posted explosive letters to British officials in London and attempted to bomb the Colonial Office.

Official police documents from the late 1940s released by the National Archives in Britain have shed light on the terrorist activities of the Zionist underground movement in Europe as well as the UK authorities' efforts to stamp the movement out as it sought to hold onto colonial territory in Palestine and elsewhere after the Second World War.

Of particular concern to British police and intelligence were the actions of Betty Knout and Jacob Eliav, operatives of the Stern Gang, who were arrested for the posting of letter bombs to UK high officials in London. The two were arrested on the Belgian-French border. Ms. Knout was released from prison in Mons, Belgium after just six months. A newspaper article from the time recounts an extraordinary exchange of the reporter with 22-year-old Ms. Knout, who operated under the alias of "Elizabeth Lazarus," saying she was "sorry" that the letter bombs did not reach their targets which included the one-time Chief Secretary of the British Government in Palestine.

From 1939 until the British withdrawal from Mandate Palestine in 1948, armed Jewish organizations such as the Stern Gang, Haganah and Irgun Zvei Leumi waged a guerilla insurgency against British forces in the region, attacking British troops and attempting to disable infrastructure and assassinate key colonial officials. The aim of the Jewish militants was to force the British to abandon the territory and enable the establishment of a Jewish state.

The British Government famously promised the Zionist Movement the establishment of a Jewish political entity in Palestine during World War I in what has come to be known as the "Balfour Declaration."

Irgun, which along with the Stern Gang and Haganah became the Israeli army after 1948, was listed by MI5 and the British government at large to be a terrorist organization.

© Photo : Pixabay
'Terrorists v Moderates': Lessons from the MI5 Middle East Files
The insurgency's most spectacular success was the bombing of the King David Hotel in Jerusalem by Irgun on July 22 1946. The attack, which targeted the administrative headquarters of the British colonial authorities of Palestine killed 91 people and injured a further 46, making it among the most devastating terrorist attacks of the twentieth century.

Despite Britain and France having conquered much of the Middle East together during World War I, by the end of the Second World War, Britain was convinced that the French, both in Europe and in the Middle East were sheltering, arming and otherwise assisting Jewish militant organizations attacking British forces. The release of Betty Knout and Jacob Eliav and the throwing of a party for them by the Stern Gang in Paris to which the media were invited seemed only to help confirm those suspicions.