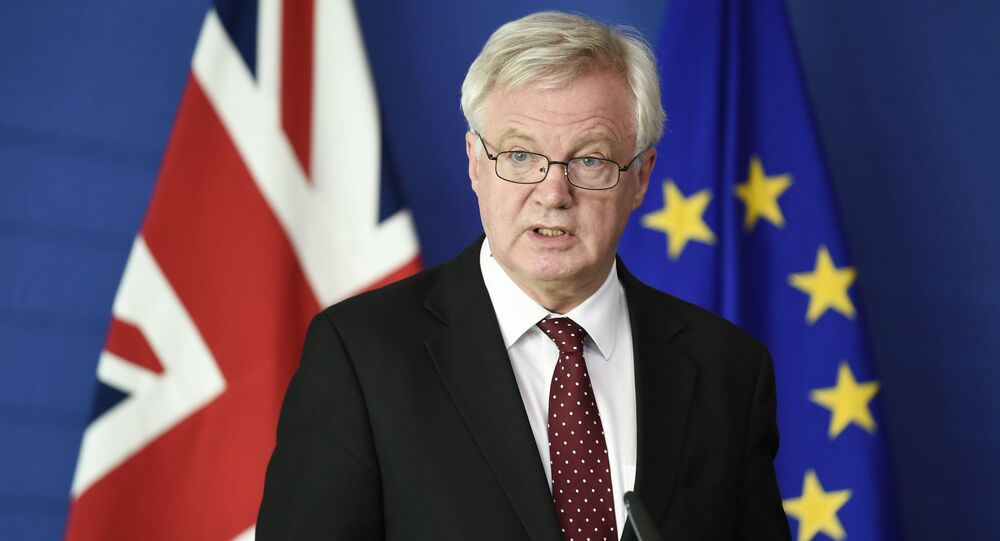 Davis’ comments came amid reports that he could be sidelined in Brexit talks in a possible reshuffle by Prime Minister Theresa May, who wants greater control over the negotiations.

David Davis, who is in charge of engineering the UK’s Brexit talks, has written an article for the Daily Telegraph, providing his vision of the future of the negotiating process, in particular calling on Brussels not to "cherry pick" which trade advantages it offers Britain after the withdrawal from the bloc.

The EU’s chief Brexit negotiator, Michel Barnier has repeatedly warned that London may not receive a special trade agreement with the block.
Davis claimed that it is Barnier who is "cherry picking" on the conditions of the future deal.

He also expressed confidence that it is realistic for London and Brussels to agree on a transition period, which will last until December 31, 2020, by March 2018.

Davis also underscored the importance of counterterrorism cooperation between London and Brussels.

"The threats Europeans face are the same, whether they are at a pop concert in Manchester or a Christmas market in Berlin," he wrote.

© REUTERS / Dylan Martinez
Labour Voters 'May Abandon Party' at the Next UK Election Because of Brexit
His comments came amid reports that his role in the Brexit process could be weakened if current Foreign Secretary Boris Johnson gets a new job involved in the negotiations in a looming reshuffle. Prime Minister Theresa May is reportedly planning a reshuffle later this month. Other reports, however, suggest that Johnson is likely to strongly resist the move.

Britain is set to leave the Union by March 2019 after the vote to withdraw from the EU occurred about 18 months ago. Since June 19, 2017, Britain and the EU have been negotiating new arrangements for the UK outside the bloc. Negotiators have to define post-Brexit trade relations between London and Brussels and terms of cooperation in various fields.

On December 15, Brussels gave the go-ahead for the next stage of Brexit negotiations, centered around a future trade relationship, which could begin after May clinches a deal on the prevention of a hard border emerging between Northern Ireland and the Republic of Ireland.