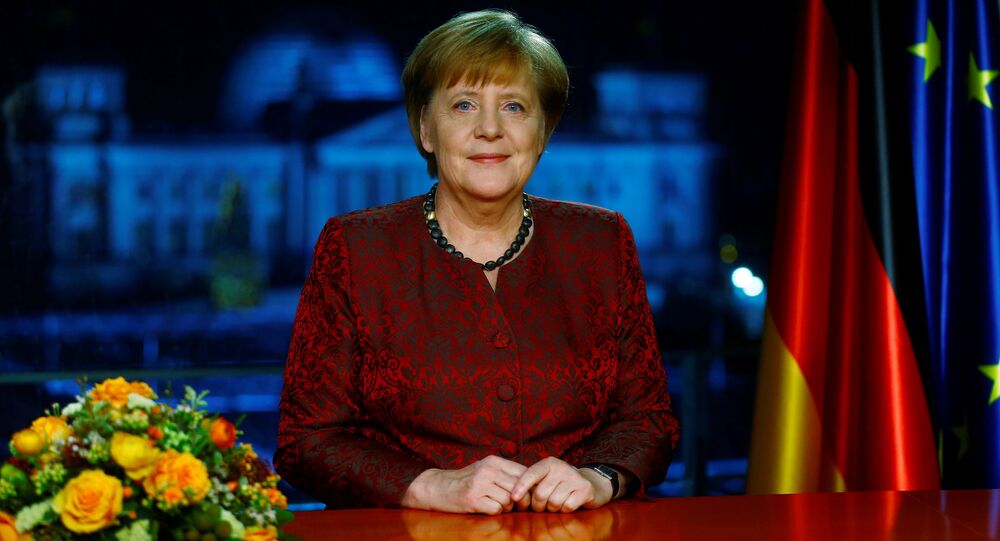 Sunday's New Year address to the Federal Republic of Germany will be Chancellor Angela Merkel's 13th - but her first without a government. Amid an unprecedented political deadlock in Germany, the country's political commentators are wondering how much longer the Chancellor can hold onto power.

Despite Angela Merkel's attempts to form a coalition, Germany remains without a government three months after federal elections. Amid the uncertainty, the German press is speculating about the Chancellor's future.

The Chancellor is due to make her annual New Year's address to the German nation on Sunday. According to German media, Merkel will call on the parties to redouble their efforts to form a government, telling Germans that "the world is not waiting for us."

Some analysts have wondered whether the chancellor's time is up, as a result of the difficulties. Writing in Spiegel Online, senior correspondent Roland Nelles noted, "There are clear signs that the Chancellor's power is crumbling and many in the Union are longing for a fresh start."

© AFP 2020 / John MACDOUGALL
German President Frank-Walter Steinmeier (C) receives German Chancellor and leader of the Christian Democratic Union (CDU) party, Angela Merkel (L), and Chairman of the Bavarian Christian Social Union (CSU) party, Horst Seehofer, for talks about a possible revival of a "grand coalition" government, at Bellevue Palace in Berlin
In addition, surveys suggest that many Germans are ready for a change of leader. A YouGov poll published on Wednesday found that almost half (47%) of Germans would like Merkel to vacate her post before the end of 2021, if she begins the next parliament as chancellor.

However, notes Nelles, Merkel "has a big advantage," in that "rivals don't exist."

According to Nelles, Merkel has "frozen out" former rivals in the party such as former prime minister of Hesse Roland Koch, while current party heavyweights such as Ursula von der Leyen and Thomas de Maiziere are "either too loyal or too politically weak for regicide."

"Therefore, potential rivals are currently only people like the (too) old Wolfgang Schaeuble or the (too) young Jens Spahn. Do the Union grandees really want to take the risk of an uprising against Merkel with them? The pain is probably not yet big enough to take that risk. That means that Merkel will probably remain mistress of proceedings in the new year," Nelles wrote."

The Westdeutsche Zeitung asks whether this will be "Angela Merkel's last New Year address," but goes on to predict that a year from now, Merkel will still be in office.

"In exactly a year, on December 31 2018, the main edition of the Tagesschau  news program will finish at 20.10. The last five minutes of the flagship news program on that evening will be the Chancellor's New Year's speech — and that person will still be Angela Merkel, despite all current (and incidentally justifiable) prophecies of doom," Ulli Tueckmantel writes.

"This is not a too daring a forecast: Yes, the poll numbers of the Chancellor and chairs of the CDU are at their worst level in years and almost every other German (47 percent) wants Merkel to leave office before the end of 2021. In her own camp, however, that figure is only 17 percent. Yes, the Merkel era is coming to an end, as some astute 'observers' have noticed, or at least the zenith has passed. But what, then, should happen, after twelve years, 100 Bundestag speeches and 1724 adopted laws in the political life of a 63-year-old?" he asked.

Who Is Willing to Form a Government With Merkel?

On Saturday, FDP leader Christian Lindner said that his party, which pulled out of coalition discussions with Merkel's party and the Greens in November, is unwilling to form a coalition with Merkel at the helm.

"Of course, after twelve years in office, Mrs. Merkel does not want to be in conflict with her own actions. But we want to be part of a renewal project," Lindner told the Frankfurter Allgemeine Zeitung, adding that he would prefer to see Merkel attempt a minority government than another coalition.

© Photo : Kurverwaltung Binz
'Colossus of Prora': Hitler's Dream Comes True During Merkel's Era
Linder pulled out of talks to form a broad "Jamaica Coalition" on November 19, after which the SPD, led by Martin Schulz, reluctantly agreed to discuss the formation of another government.

Following four years of "grand coalition," on September 24 the CDU/CSU and SPD both recorded their worst election results since the 1940s. Schulz had announced that the party would spend the next parliament in opposition, in the belief that coalition compromises had led it to lose popularity with voters. the SPD suffered a similar fate after its 2005-2009 coalition with Merkel, its share of the vote declining by 11.2 percent.

The FPD also fears losing popularity in elections subsequent to its participation in a coalition government. Following its coalition with Merkel's CDU/CSU from 2009/2013, the party failed to gain the necessary 5% of votes to get seats in the Bundestag, and was left without representation in the federal parliament.