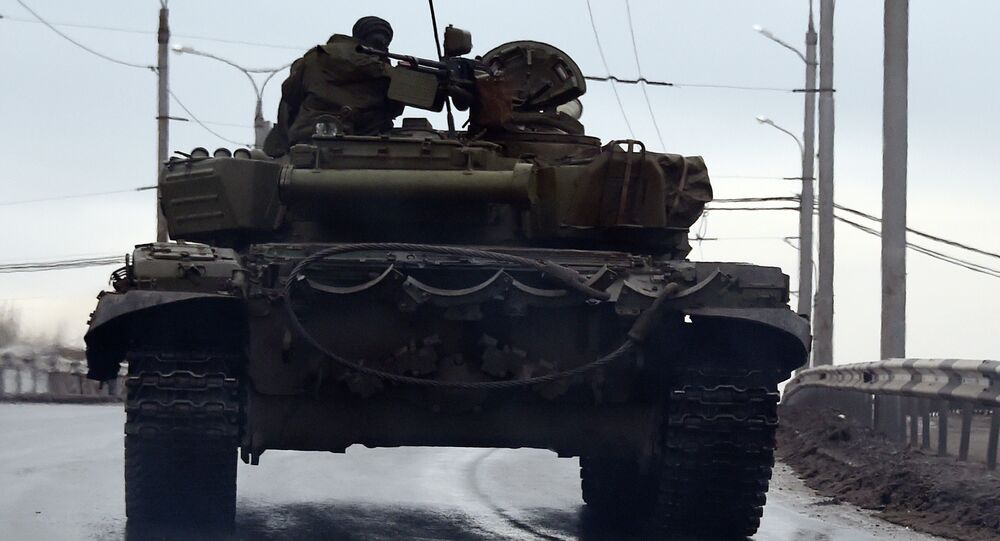 The Russian deputy foreign minister went on by expressing concern over the US plans to supply Kiev with lethal weapons, commenting on reports on the State Department's December 22 announcement of the US decision to provide Ukraine "enhanced defensive capabilities" aimed at building up Kiev's "defense capacity."

"We have been extremely disappointed by the news that the US authorities had given one of its arms manufacturers a license for supplying Kiev with large-caliber sniper rifles… Washington 'hawks' are thus attempting, the way they see it, to raise 'the price of the conflict in Donbass' for Russia. This is a deficient and dangerous reasoning. It leads to war, not to peace," Karasin explained.

The Russian deputy foreign minister urged the United States and Canada to analyze the potential consequences of selling lethal weapons to Ukraine.

"Do Washington and Ottawa have the guarantee that their lethal weapons will not fall into the 'wrong hands'? That they won't be picked up by terrorists? Or, for example, that they won't be sold by enterprising Ukrainian businessmen somewhere in the Middle East or in some other spot on the map that is 'sensitive' to the United States itself, above all?" Karasin noted.

The diplomat stressed that the United States and Canada were opening a "Pandora box" and "in fact, getting involved in the internal Ukrainian conflict, fanning the flames and making it international."

"A few hundred US, Canadian and other NATO military instructors are 'working' in Ukraine at the moment, with Ukrainians now about to see them differently, as full-fledged participants of the non-declared civil war in the southeast," the deputy foreign minister said, adding that the Ukrainians had different opinions about the situation in the southeast of the country and of all the foreign "soldiers of fortune" who arrived in the country.

According to the Washington Post's report last week, the State Department approved the sale of $41.5 million worth of M107A1 sniper systems, ammunition as well as associated parts and accessories to Ukraine, with the Pentagon waiting for instructions from the State Department on the issue, ready to support their position.

The move follows the ratification of the National Defense Authorization Act for the 2018 fiscal year by US President Donald Trump in early December, which, among other provisions, stipulates allocation of $350 million in security aid for Ukraine, including lethal defensive weapons. At the same time, Canada put Ukraine on its Automatic Firearms Country Control List, allowing Ottawa to supply Kiev with several types of weapons but only after receiving authorization from the Canadian Foreign Ministry.

Speaking about the breakaway Donbass region, the Russian deputy foreign minister has explained that, in accordance with the Minsk agreements, the region should be granted a special status as a part of Ukraine.

"In reality, we see the reverse process. Instead of the reintegration of the region into the general political and economic landscape, the Ukrainian leadership with its own hand is, in fact, expelling the south-east from the country… by suspending social and pension payments, ceasing water supply, electricity," Karasin said.

He has explained that Kiev was doing such activities to spark mass discontent and force the region to surrender.

"Such activities contravene the Minsk agreements, which prove the necessity of taking measures to boost the humanitarian situation and economic restoration in Ukraine’s southeast, the establishment of trade relations with our country," Karasin added.

The future of the breakaway Donetsk People's Republic (DPR) and Lugansk People's Republic (LPR) should be determined by the local residents, however a reasonable settlement of the crisis could be achieved only through direct and constructive dialogue between the sides and Kiev, the deputy minister stressed.

Karasin warned against the project of UN resolution on the deployment of peacekeepers in Donbass, drafted by Ukraine.

READ MORE: US Decision on Arms Supplies to Kiev Was 'Expected,' Analyst Says

"We see that our compromise initiative on the establishment of a UN mission to promote the protection of the OSCE monitoring mission was opposed by Kiev and its allies. Instead of it… the non-starter scheme of the ‘peacekeeping’ operation, actually aimed at the forced return of the region under the control of Ukraine using an international contingent was offered," the diplomat underlined.

The statement follows the stance voiced by Russian President Vladimir Putin in early September, backing the idea of sending peacekeepers to Donbass provided that the mission is deployed solely along the contact line separating self-proclaimed Lugansk and Donetsk republics and government-controlled territory. This stance opposes Kiev's idea, presupposing a UN peacekeeping mission to be stationed across the entire conflict-ridden Donbass region, up to the Russian border.

According to Ukraine's Foreign Minister Pavlo Klimkin, Ukraine had developed a joint draft UN resolution on Donbass peacekeepers in coordination with the United States, Germany and France.