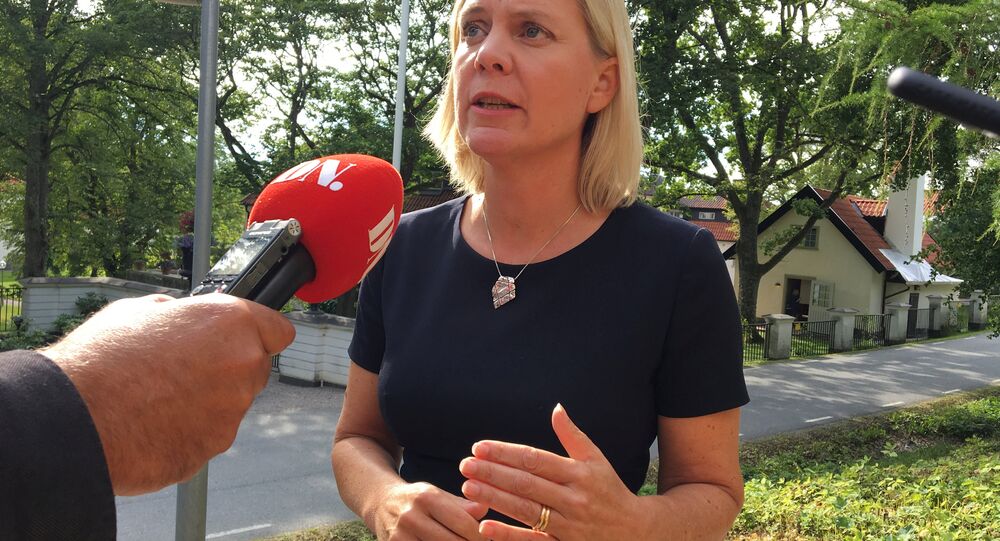 Swedish Finance Minister Magdalena Andersson has sparked criticism in the Nordic nation that sees itself as a "humanitarian superpower" by stating that Stockholm has exhausted its resources by taking in more refugees after the dramatic 2015 influx and suggesting migrants should seek luck elsewhere in the EU.

Magdalena Andersson of the Social Democrats party lashed out against the country's failing integration procedures that hamper the further intake of refugees and migrants, stressing that the nation's capacity was stretched to the limit by the 2015 migrant crisis, when Sweden, a nation of 10 million, took in 163,000 refugees, the highest per capita in the EU.

"Integration is not working properly. It didn't work before the autumn of 2015 either, but for me it is obvious that we cannot have a larger asylum reception than that we are able to integrate," Magdalena Andersson told the Dagens Nyheter daily. "That is not good for the people who come here and it is not good for society at large either," she added.

© CC0
Is Sweden Ready to Go Chinese on Family Planning?
Andersson stressed that the Nordic nation was already experiencing a major housing shortage and a dramatic lack of teachers as a result.

"We must ensure that we never end up in such a situation as we were in the fall of 2015," Andersson said, referring to an emergency situation, when newcomers had to be stationed in tents, former barracks and hotels.

According to Andersson, the focus must be put on those who have the right to stay in Sweden, providing them with shelter, education and jobs.

Andersson also implored migrants and refugees to seek asylum in other EU countries, implying they would have more opportunities. Those persisting in coming to the Nordic nation will face a "rather strained situation," Andersson warned.

The influx resulted, among other things, in a widening gap between ethnic Swedes and "newcomers" in terms of employment and living standards. Despite the Swedish economy going strong, it takes an average of nine years for an immigrant to get a job. While the general level of unemployment lies about 7 percent, about a quarter of those born abroad are unemployed.

"Either you are an open country and invest in your citizens, believing that people who come can contribute and build something new, or you're a closed country," Fridolin told Dagens Nyheter, ensuring that Sweden was fully capable of solving the problems Swedish society was facing.

According to Fridolin, there was a risk that if Andersson's view were shared by other EU nations, there would be no refuge for those in dire need of it, referring to the conflict in Syria, which he dubbed the worst in modern times. In recent years, Syrians became the largest group of immigrants in Sweden, followed by Eritreans, Poles and Iraqis.

Marie Demker, a professor of political science at Gothenburg University, slammed Andersson for "lack of empathy," venturing that such "nationalist" rhetoric was remarkable of the government's "second-heaviest" minister, Dagens Nyheter reported.

The "bumper crop" year of 2015 forced Sweden to backtrack on its generous asylum policy by tightening border controls and introducing ID checks. The government itself admitted a "respite" was needed due to overstretched infrastructure. The more restrictive type of policy resulted in less than 30,000 people coming to Sweden in 2016. In 2017, the number of asylum seekers dropped further to about 25,000, Sweden's Migration Board reported.