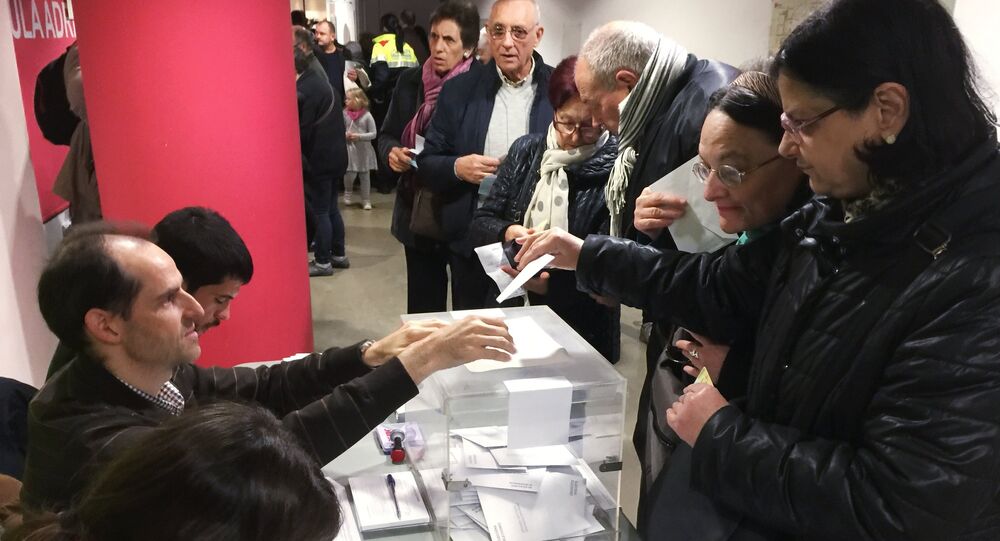 MOSCOW (Sputnik) – There will be 135 seats in the Catalan government contested, and a party must win 68 seats to acquire an absolute majority. According to the most recent poll by Feedback, no individual party will be able to earn this majority in the election.

Junts per Catalunya, the party led by former Catalan President Carles Puigdemont, is set to gain 27-29 seats in the election and 19 percent of the vote. This is 20 percent less than the party had gained in the 2015 election, where it came out with 62 seats.

​Puigdemont went into self-exile in Brussels with four other former Catalan government ministers after the Spanish national court charged him with sedition, rebellion, and misuse of public funds over the referendum. He has expressed his desire to return to Catalonia if pro-independence parties are successful in the election and held a rally for supporters in Catalonia via live broadcast from Belgium.

Eight other former ministers have been jailed by a Spanish judge on the same charges, and 20 were called before the court in November. While six politicians were released on bail in early December, Oriol Junqueras, the deposed vice president of the Catalan government and leader of the Republican Left of Catalonia, has been campaigning for the election from behind bars in Madrid.

Jordi de la Fuente, the foreign affairs manager of the Platform for Catalonia (PxC) party, predicted that if pro-independence parties were to gain a majority of seats in this election, as predicted by polls, but not a majority of votes, which could be possible under Catalonia's proportional representation voting system, then their success may be short-lived, as a subsequent, premature election would be inevitable.

“If separatist parties win in parliamentarians — but not in votes — the new government will be fragile and the autonomous block we have — 155 article of Constitution — will remain, so we will have new election minimum in six months,” Fuente told Sputnik.

Thursday's election was triggered by the Spanish government’s use of Article 155 on October 27, after the Catalan government adopted a resolution on the region’s independence from Spain. This article of Spain’s Constitution was implemented by the central government and meant Madrid could remove the leaders of Catalonia’s government, take control of the region’s administration and call for new elections.

On October 1, over 90 percent of the more than 2.2 million Catalans who participated in a regional referendum supported secession from Spain. The referendum was declared illegal by Spain’s constitutional court. Fuente remarked that the election on Thursday would be another type of independence referendum.

“The popular feeling is that election is another kind of 'legal referendum' between Yes and No forces,” Fuente said.

Catalonia had previously held an informal self-determination referendum in 2014, in which 80 percent of voters backed independence.