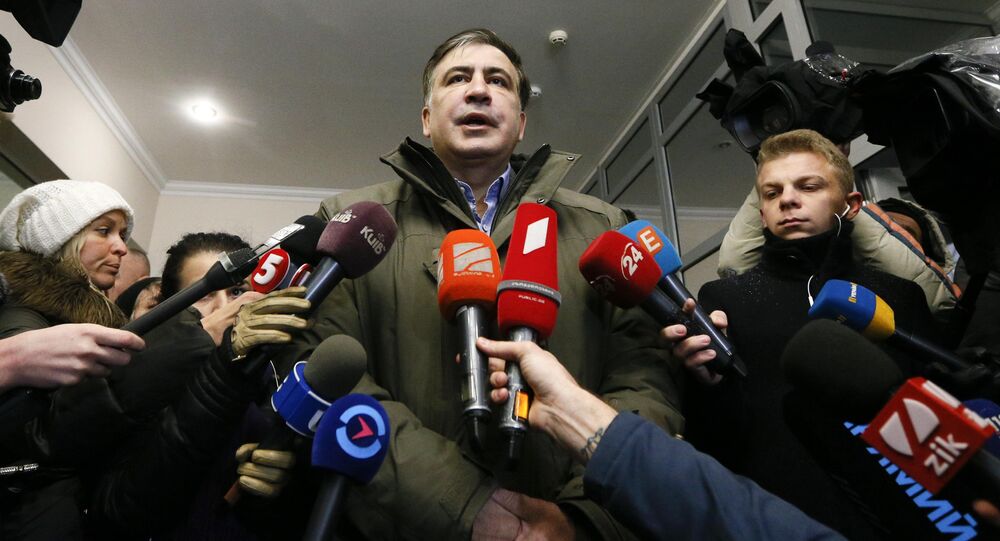 The politician added that in the event of a voluntary resignation Poroshenko could "count on mitigating punishment and pardon." Saakashvili also accused the Ukrainian president’s administration of carrying out a provocation near Kiev’s October Palace.

"Admit it to yourself and to the people – you and your colleagues cannot and do not want to change Ukraine for the better. Your voluntary resignation is almost the last chance to overcome the political crisis," Saakashvili wrote on Facebook on late Tuesday."Your administration organized a provocation near the October Palace. I admit that I fell for this provocation," the politician said.

© AFP 2021 / VASILY MAXIMOV
Saakashvili Presents 'Plan to Rescue Ukraine in 70 days' Using Parliament as a Screen
On Sunday, Saakashvili’s supporters broke into the October Palace in the center of Kiev, engaging in clashes with the National Guard servicemen inside the building. However, Saakashvili himself urged the protesters to leave the building, and said that he did not encourage them to storm the palace. The opposition figure claimed that the actions were caused by a provocation of the Ukrainian law enforcement agencies.

In October, Saakashvili presented his "Plan to Rescue Ukraine in 70 days," providing for the impeachment of Poroshenko, the adoption of a package of laws, including a bill on oligarchs, legislation on the parliamentary election and several reforms in the fields of taxation, customs and health services.

© REUTERS / Serhii Nuzhnenko
Stateless Ex-President of Georgia Goes on Hunger Strike in Ukrainian Jail
Saakashvili was initially invited to take the office of Odessa governor in 2015, receiving Ukrainian citizenship and therefore losing his Georgian passport. In November 2016, he resigned from his post, accusing the Ukrainian authorities of not having the will to fight corruption.

In July 2017 his Ukrainian citizenship was revoked as it turned out that he had provided incorrect information on the citizenship application. Saakashvili, who was away from the country at the time, forced his entry to Ukraine from Poland with help of several hundred of his supporters in September.