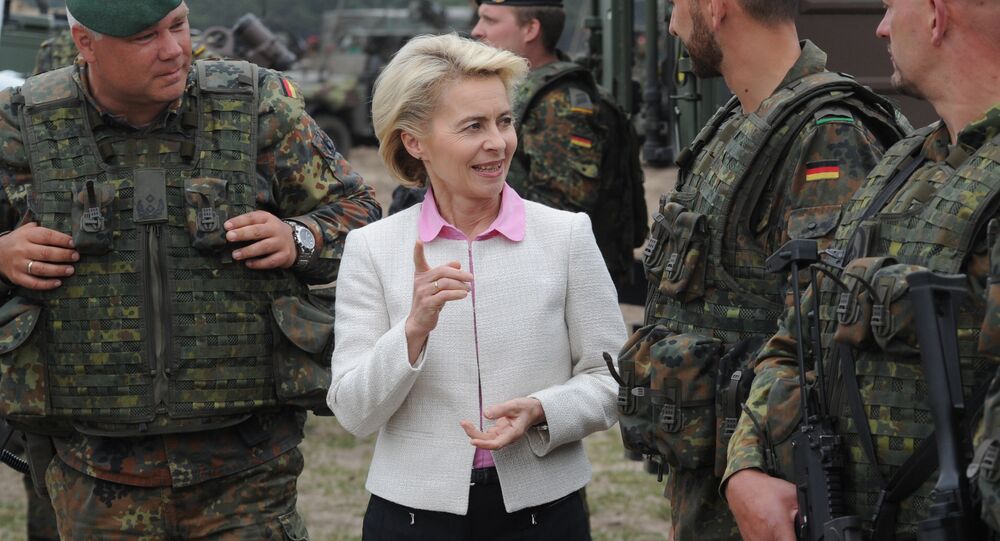 Amid the grave political crisis in Germany which erupted over stalled talks on building a government after September general election, German Defense Minister Ursula von der Leyen intends to discuss in the Bundestag the possibility of extending the mandate of German troop missions.

Germany's Defense Minister Ursula von der Leyen plans to prolong the deployment of the country's military abroad for a year regardless of the progress achieved at the negotiations on coalition building, she stated in her interview with German Funke Mediengruppe.

Von der Leyen said that the largest detachments of German troops are operating in Afghanistan, Mali and Northern Iraq. The Minister pointed out that Germany's partners rely on the country's sustained military presence on the territory of these nations, adding that the task of combating Daesh in Iraq has not yet been completed.

© REUTERS / Axel Schmidt
Lego Merkel-Style: Who Will Pay for Anti-Terror Security in Germany
In December, the Bundestag, Germany's national parliament, was due to make a decision on the country's military missions mandates in Afghanistan and Syria. The other five foreign deployment mandates expire in January 2018. However, with government-forming talks still underway for the time being, only a three-months extension is possible, as the German parliament is entitled to approve the government's requests pertaining to the country's troops abroad.

Earlier this week, the Bundestag renewed Germany's military deployment in all countries where its troops have been present for three months. In parliamentary debates, all parties stressed the recent success achieved in the fight against the Daesh terrorist group in those areas, and thus stated that the extension of missions mandates in Syria and North Iraq must be newly discussed and decided in parliament.