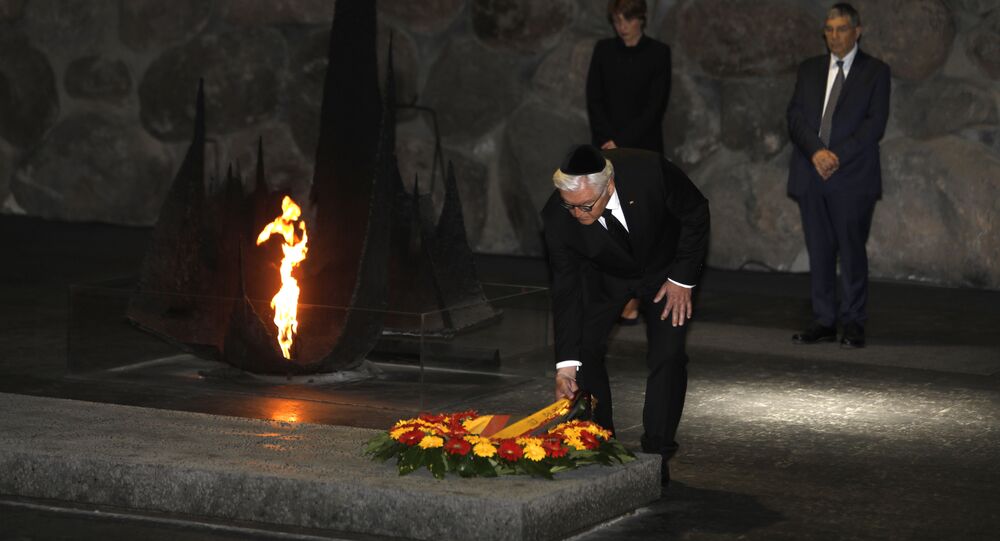 Speaking at the Israeli embassy, German President Frank-Walter Steinmeier admitted that anti-Semitism has yet to be tackled in Germany and that he was "horrified and ashamed" by the news that protesters in Berlin were burning Israeli flags.

"It is showing its evil face in many shapes, including public acts with hate-filled slogans, but also in the spreading of prejudice and ethnically-charged politics," he said.

He lashed out at those burning Israeli flags on German streets, saying that they "do not understand, or do not respect, what it means to be German."

Spoke to President Steinmeier of Germany who conveyed his sincere condemnation of what he noted were deeply distressing expressions of anti-Semitism during a wave of anti-Israel activities in Berlin over the last week. We cannot allow anti-Semitism in Germany or anywhere.

In this vein, Steinmeier said that historically, Germany was responsible for the Nazi holocaust, and insisted that the onus of this should be felt by each and every German citizen.

"This responsibility does not recognize caveats for migrant backgrounds and no exceptions for newcomers. It is non-negotiable, for everyone who lives here and wants to live here," he emphasized.

German President Steinmeier at Israeli Embassy in Berlin: Even immigrants need to carry "responsibility for Israel’s security" & reject any form of racism & anti-Semitism.

"It is non-negotiable – for all who live in Germany and want to live here!"@JIssacharoff @IsraelinGermany

Commenting on Trump's decision related to Jerusalem, Steinmeier said that "there are good reasons to doubt that the unilateral recognition of Jerusalem would contribute to peace in the Middle East."

Last Sunday, about 2,500 people staged a demonstration in the Neukolln district of Berlin, protesting US President Donald Trump's decision and burning Israeli flags during the rally.

Important and vivid debate in #Berlin: FM @sigmargabriel meets with Kreuzberg Initiative against Anti-Semitism. The common conviction: there is no space for antisemitism in Germany. pic.twitter.com/8s0dYu5GWG

German Interior Minister Thomas de Maiziere pledged to prevent "such disgraceful insults to the Jews and the state of Israel" in the future, with German Justice Minister Heiko Maas saying that any form of anti-Semitism posed a challenge for the country.

‚We turn against all kinds of anti-Semitism and xenophobia.‘ — Angela Merkel during press conference at @cdu on burned Israeli flags during protests in Berlin. pic.twitter.com/TxmlSycyJe