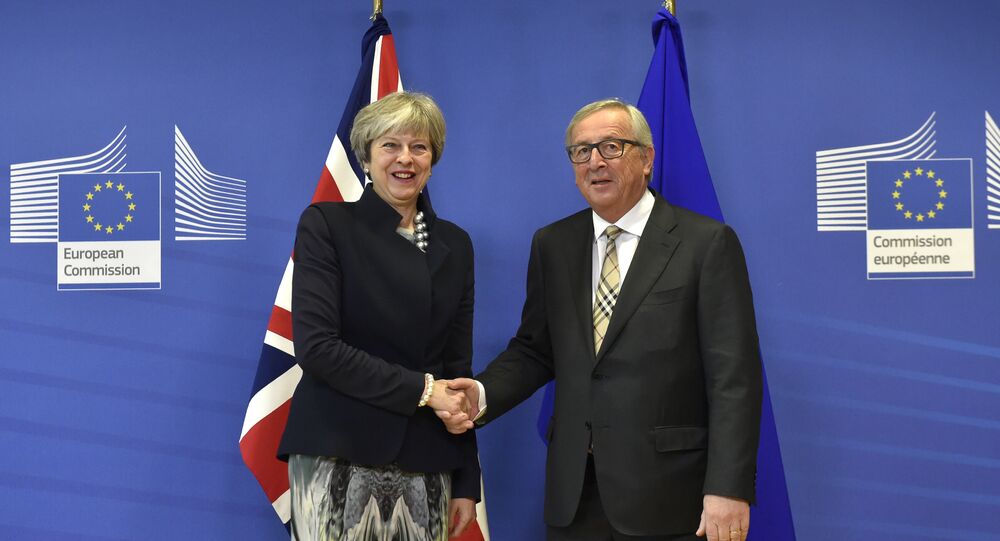 "We, in parliament, are in favor of moving to the second stage of the negotiation process … The European Parliament intends to be vigilant when it comes to the three points in the framework agreement — the rights of citizens, Northern Ireland’s border and financial aspects," Tajani stated at a press conference, echoing the European Parliament’s vote on Wednesday.

© REUTERS / Andrew Yates
It's a Cracker! UK Premier May Becomes Butt of Christmas Joke of the Year
Last week, UK Prime Minister Theresa May and European Commission President Jean-Claude Juncker issued a joint report on the progress achieved during the first phase of negotiations. On Wednesday, the European Parliament backed a resolution recommending that the European Union decide that "sufficient progress" had been made in Brexit talks, thus allowing the second stage of withdrawal talks to start.

The European Council meeting, which started on Thursday, is expected to open the door to the second phase of negotiations on Friday. The future talks are going to focus on a transition period in EU-UK post-Brexit relations, and their future long-term trade and security cooperation.

Brexit negotiations between the United Kingdom and the European Union started on June 19, and are due to be completed by the end of March 2019.

'Pandora's Box is Open': May Says She is Now 'On Course' to Deliver Brexit