An investigation into the tragic incident revealed that a deadly fire had spread because of its cheap, highly flammable panels.

According to Reuters, certain building companies which had previously installed the same unsafe cladding that contributed to the high death toll of the Grenfell Tower fire this June, were re-hired by the British authorities to re-do their work.

Following the deadly fire, which took the lives of 71 people, the UK Government commissioned a series of test to find which type of cladding was hazardous.

The tests established that at least 161 other high rise towers across the UK featured the unsafe panels that are highly vulnerable to fire and the government ordered costly renovations of the buildings in question.

In a surprising twist, Reuters's review found that at least 29 of these towers will be remodeled by the same construction companies that originally installed the highly flammable aluminum panels with polyethylene cores, pocketing millions of pounds in process.

© REUTERS / Toby Melville
Frantic Tests Being Carried Out on Cladding in 600 UK Tower Blocks After Fire
The rehired companies are Willmott Dixon and Wates, based in the UK, as well as French construction giant Engie.

The review revealed that Wates had obtained new contracts with Westminster City Council in London and One Manchester association to renovate some 14 housing towers that it itself cladded in 2007 and 2010.

Engie was reportedly re-hired by Barnet Homes in north London and by the local council in Salford to reclad 12 blocks of flats.

Willmott Dixon was approached by Octavia of west London and Oxford council to replace panels on three public housing projects.

Reuters's review revealed that Salford council will spend as much as £25 million on the renovations, while other councils and housing associations only released limited figures on their recladding contracts. 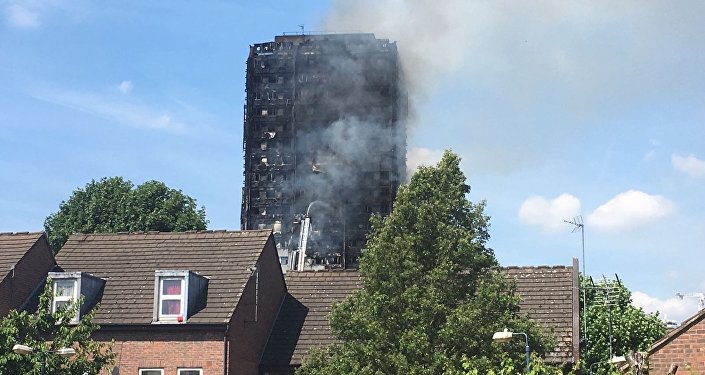 © Sputnik / Jenny McCall
London Mayor Says Residential Towers Like Grenfell May Be Gradually Demolished
Barnet Homes will pay £8.2 million for three towers, Westminster will  spend £6 million for six public housing projects and Octavia will spend £2 million on the renovation of one of its blocks.

On the 14th of June, the 24-story Grenfell Tower in north London caught fire due to a faulty fridge-freezer. The blaze spread rapidly spread due to flammable exterior cladding.

Over 250 British firefighters and 70 fire engines were involved in combating the fire that took the lives of dozens of residents.

An independent inquiry is still in progress, with its findings expected to be published next year.