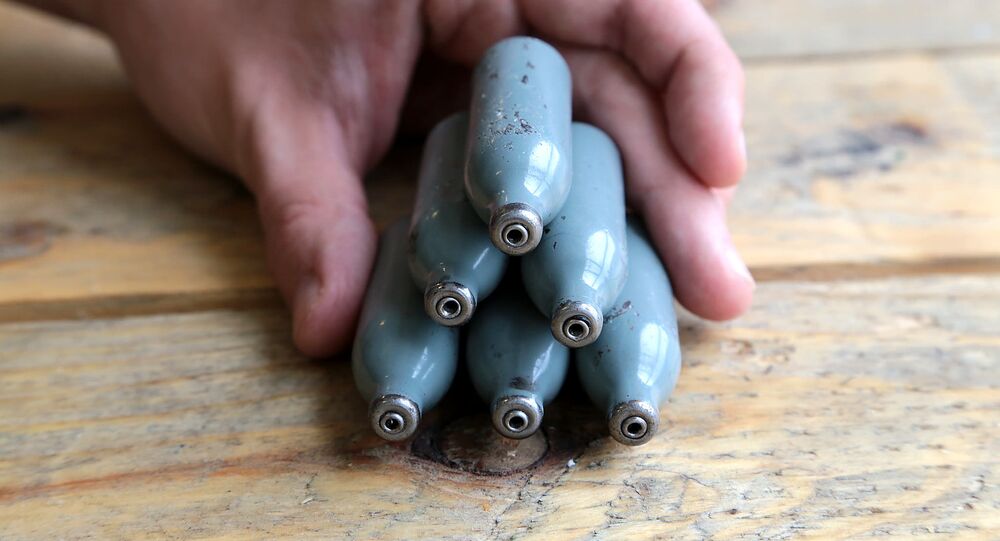 Nitrous oxide, more commonly known as "laughing gas" is gaining popularity in Scandinavia as a recreational drug. Formally not classified as such, it is known to give users both a fleeting high and lasting health hazards, which alarms local doctors.

Being perfectly legal despite extensive health risks, laughing gas was recently found to be sold in the open in at least two nightclubs in the Swedish city of Gothenburg, as well as an unspecified number of venues in Stockholm to the chagrin of local medics, Swedish Radio revealed.

Cylinders of nitrous oxide are sold on the bar menu alongside other commodities, a practice nightclub visitor Josephine referred to "as common as buying a beer."

When inhaled, nitrous oxide and produces a short-term euphoric sensation lasting between 20 to 30 seconds. However brief the ecstasy, the drug is known to have adverse health effects, especially if mixed with alcohol.

"The acute immediate effect washes out the oxygen from your lungs, leading to a deep oxygen deficiency. One can faint, experience cramps or even cardiac arrhythmia," Kai Knudsen, a leading physician at the anesthesia clinic at Sahlgenska University Hospital told the Svenska Dagbladet daily. "It is not meant to be used like this. This is a medical gas being used in the wrong way," Knudsen said, voicing criticism of the fact that the rules are so unclear that they allow for laughing gas to be sold openly.

© CC0
V for Viagra: More Virility-Boosting Medication Gobbled by Young Swedes
Although nitrous oxide per se is seldom lethal, there have been fatal cases. In 1990, a 24-year-old from the town of Örnsköldsvik died when inhaling laughing gas through a siphon.

"In case of prolonged use, it affects the bone marrow and the nervous system causing the loss of sensation and a feeling of numbness," Kai Knudsen explained.

Ultimately, excessive consumption of laughing gas can lead to anemia, undermining the blood's ability to carry oxygen. The risk of long-term effects of nitrous oxide is particularly high for people experiencing a lack of vitamin B-12.
Nitrous oxide is a colorless gas with a faint, sweet smell.

It was first synthesized in 1772 by English natural philosopher and chemist Joseph Priestley. Its use by the British upper class as a recreational drug to "get the giggles" provided nitrous oxide with its alternative name.

It has long been used as an analgesic in health care, primarily in childbirth and is still in use by ambulance crews in many countries. Inhalation of high doses can lead to unconsciousness, brain damage and sudden death.