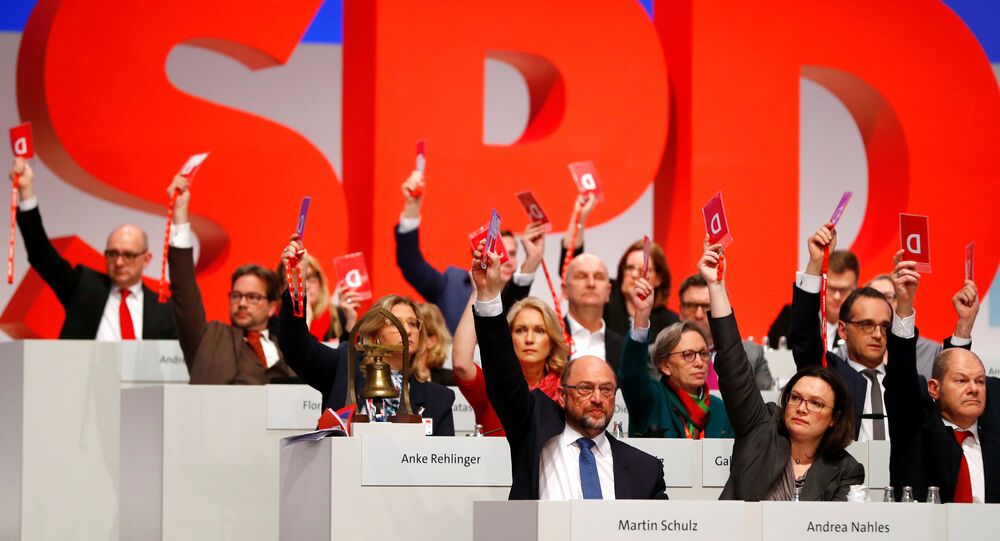 Following her party's victory in Germany's general elections in September 2017, Chancellor Angela Merkel is trying her best to form a coalitional government amid major setbacks.

Next week will see the beginning of talks on the formation of a government between German Social Democratic Party (SPD) and Chancellor Angela Merkel's ruling conservative alliance between the Christian Democratic Union of Germany (CDU) and the Christian Social Union (CSU).

An SPD official said that Merkel, her Bavarian ally Horst Seehofer and SPD leader Martin Schulz are expected to sit down for consultations in Berlin next Wednesday, something that he warned does not mean that the so-called "Grand Coalition" will be created as a result.

"It's no more and no less than having talks. It's not automatic that we'll end up in a grand coalition — rather tough discussions will be necessary, and I don't know what the conservatives are prepared to work with us on," SPD parliamentary leader Andrea Nahles was quoted as saying by Reuters.

On Thursday, SPD members voted overwhelmingly to allow their party's leadership to enter talks with the CDU/CSU alliance on establishing a coalition government, in a move that was earlier endorsed by Shultz.

In November, the Free Democratic Party, which was expected to enter into the so-called Jamaica Coalition with Merkel and the Greens, announced its withdrawal from the coalition talks, declaring that it will remain in opposition.

READ MORE: Merkel's Staff Rules Out Coalition With AfD: 'We Will Never Accept Their Ideas'

Last week, SPD and the CDU/CSU alliance signaled their readiness to enter coalition talks, despite the SPD's previous unwillingness to form the Grand Coalition.

During its parliamentary election win in Germany on September 24, 2017, Merkel's CDU/CSU alliance obtained 33 percent of votes and secured 246 seats in the parliament, failing to secure an absolute majority.

The SPD came second with 20.5 percent of the vote and 153 seats, while third place went to the Free Democratic Party, which got 10.7 percent and 80 seats.