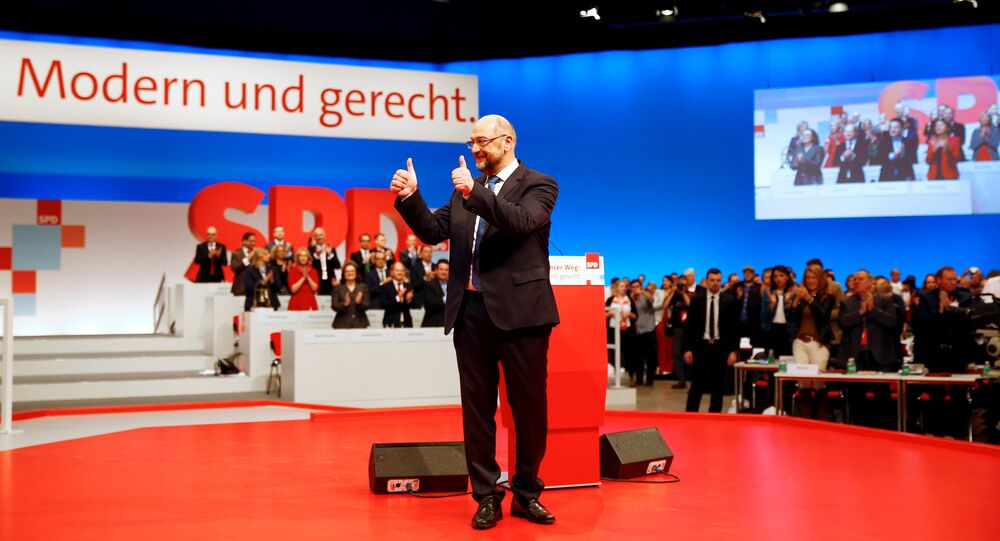 The leader of Germany's Social Democratic Party Martin Schulz has called on Germany to lead efforts to form a "United States of Europe" by 2025; he says that if countries don't want to be a part of the superstate, they should be forced to leave the EU.

A "United States of Europe" should be a reality by 2025, former European Parliament President Martin Schulz declared on Thursday.

"Let us finally have the courage to move Europe forward," Schulz, who took over as Social Democratic Party (SPD) leader in January, told 600 delegates to the SPD party conference in Berlin.

Schulz said that if EU members don't want to sign a new constitutional treaty to create a United States of Europe, they should leave the EU.

He also hit out at the economic policy pursued by former German Finance Minister Wolfgang Schaeuble, who has recently moved to Bundestag President. Along with Angela Merkel, Schaeuble was a key figure in the EU's refusal to provide debt relief for Greece or other debt-ridden countries in the bloc.

"Our continent can't afford four more years of German European politics a la Wolfgang Schaeuble," Schulz said, referring to Europe as "life insurance," which "can enforce rules in [the time of] globalization."

​Schulz also took the opportunity to acknowledge responsibility for the party's poor result in federal elections on September 24, when the SPD came second with just 20.5%, its worst result since 1949.

"As candidate for Chancellor, I am responsible for this election result," Schulz said at the beginning of his speech.

In the immediate aftermath of the election, in the belief that coalition compromises cost his party support, Schulz declared that his party will not take part in another "grand coalition" with Angela Merkel's Christian Democratic Union/Christian Social Union (CDU/CSU).

However, following the failure of talks between the CDU/CSU, the FDP and the Greens, two weeks ago Schulz bowed to pressure and held talks with Merkel about the prospect of forming a government.

© REUTERS / Axel Schmidt
No Rush: German SPD Not Hurrying to Form Grand Coalition With Merkel's CDU
Within the party, the move is controversial and delegates to the SPD conference are slated to vote on Thursday afternoon on whether to officially enter coalition negotiations with Merkel's party.

In his speech, Schulz called for "open-ended discussions" with the CDU/CSU on forming a government, but indicated that the SPD has demands with regard to work, education, environmental protections, as well as Europe.

"We want to talk open-mindedly and look to see what kind of meaningful solutions we can come up with," Schulz said. He declared, "We do not have to rule at all costs. But we also can't refuse to rule at any cost."

No Means No: German Pilots Thwart Dozens of Refugee Deportations