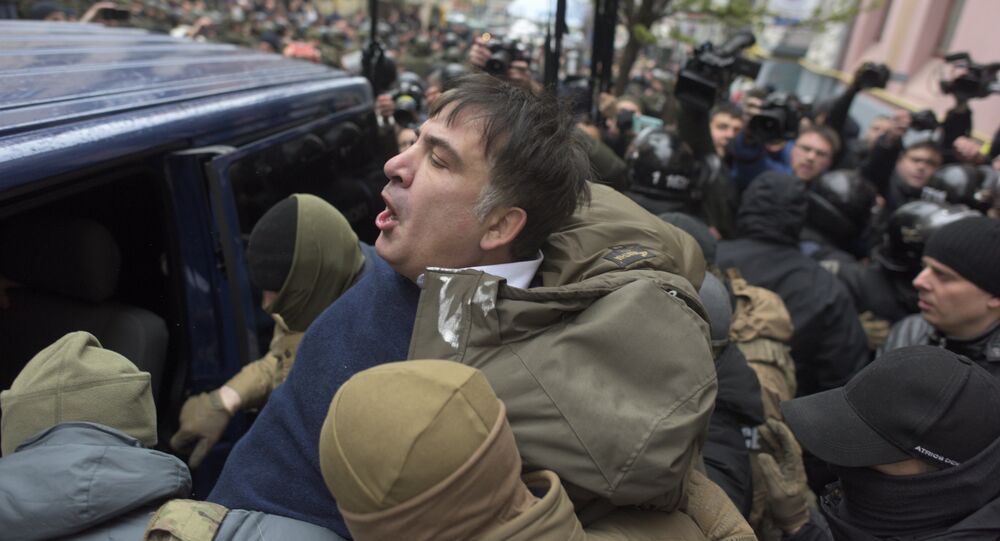 Mikhail Saakashvili, former president of Georgia and former governor of Ukraine’s Odessa Province, created a spectacle that had even Western media shaking their heads Tuesday: when police came to search his house , he climbed atop its roof, screamed insults at Ukrainian President Poroshenko and threatened to jump off if anyone touched him.

He was dragged away by a squad of security service officers. Saakashvili, "a one-time darling of the West," according to New York Times, is wanted in Georgia for multiple criminal charges and now in Ukraine, for allegedly helping coup plotters. He had already been stripped of his Ukrainian citizenship.

© REUTERS / Stringer
Mikheil Saakashvili Faces Deportation from Ukraine in Coming Weeks – Reports
Screaming to his supporters who gathered below, Saakashvili denounced the president as a thief and a traitor while insulting other figures while he was at it.

The demarche ended after a squad of intelligence service officers dragged the ex-president away from the edge of the roof. The officers took the politician to the police van, but a group of Saakashvili supporters managed to surround the van and free their idol, still with handcuffs on his wrists. According to a Daily Mail report, National Guard riot police were dispatched to help Ukrainian security services personnel release the van but they soon found themselves surrounded by a crowd of protesters.

Despite the use of tear gas, the protesters freed Saakashvili, who then led a demonstration toward the Verkhovna Rada building, where the country's parliament meets, and said he will stay there "until the people make these falsifiers resign," according to Ukrainian News.

Ukrainian General Prosecutor Yuri Lutsenko has given Saakashvili until morning to turn himself in, saying he will demand home arrest, not deportation, for the politician.

Even Western media couldn't hide their disdain for the political drama, with New York Times calling the scene a "spectacle that only buttressed [Russia's] view that Ukraine is a chaotic shambles incapable of running its own affairs."

In their report on the development, Reuters noted that "the chaotic scenes of [Saakashvili's] detention and escape are likely to undermine the image of stability that Ukraine's leadership are keen to present to foreign backers."

"Tuesday morning's arrest was the latest chapter in the bizarre and incongruous recent biography of a man who was once considered the reformist hope of the post-Soviet region," reported The Guardian.

The Kremlin reacted to the situation with bewilderment and humor.

Talking to journalists, President Vladimir Putin's spokesman Dmitry Peskov said, "you know, we're not used to reacting to statements made by people who are sitting on roofs."

"We are observing events overall with interest. Of course, this is Ukraine's headache. This is something you wouldn't wish even on an enemy, that's how I'd put it," he added.

The comedy does not end there, though. When asked what exactly Saakashvili is wanted for, Lutsenko reportedly said that — wait for it — "pro-Kremlin forces" led by Saakashvili himself were attempting to organize a coup in Ukraine. According to Lutsenko, the operation is supposedly funded by a runaway Ukrainian oligarch, a member of a criminal group that has direct connections to Russian counter-intelligence services, according to video by 112.UA.

The Guardian reports that Saakashvili responded by insisting "it was Poroshenko who was acting to benefit the Russian president."

Saakashvili had been appointed by Poroshenko, an old friend, to help energize and transform Odessa in 2015, but by the end of the next year the relationship had ruptured and Saakashvili stepped down, vowing to oppose his former partner. Allegations of corruption, naturally, have been lobbed back and forth ever since.

We suggest stockpiling popcorn for this one.