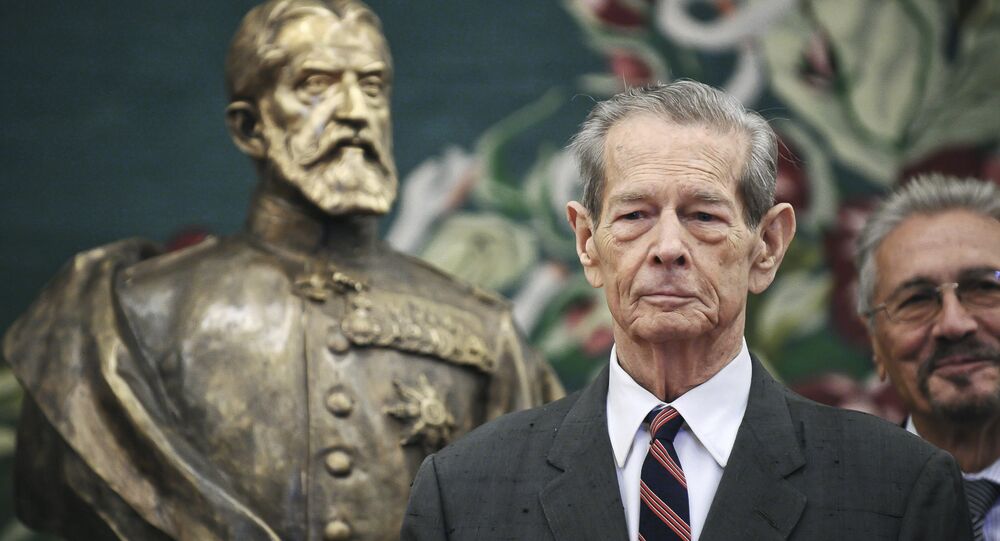 King's Legacy: How Michael I of Romania Saved His Country From Bloodshed in WWII

Michael I, the former king of the Southeastern European country of Romania, passed away at the age of 96. Sputnik takes a look back at a few of the key moments from his life, including the heroic deed which earned him eternal gratitude from Romanians and the Allies during World War II.

Michael, the last surviving former WWII leader, died Tuesday during lunchtime at his residence in Aubonne, Switzerland, Romania's royal house reports. The former king had been suffering from leukemia and another form of cancer, leading to his withdrawal from public life last year.

Born on October 25, 1921, Michael I's two-part reign began when he was just a child, running from 1927 to 1930, and continued during the crucial years of 1940 to 1947, when he was a young man, after his father Carol II was forced to abdicate over Romania's treaty-based territorial losses to Hungary, Bulgaria and the Soviet Union.

On August 23, 1944, King Michael went ahead with the singular defining moment of his political career, leading a successful coup against Antonescu as the Soviet army approached northeastern Romania in its successful counteroffensive against Nazi forces.

© AP Photo / Eugen Oprina
'Why Are We Spending So Much on Defense?' Basescu Ridicules 'Russian Threat'
Michael's coup led to Romania's withdrawal from the Axis, thereby saving the lives of thousands of Romanian civilians and potentially tens or even hundreds of thousands of Romanian and Soviet soldiers from certain death. The coup also led to turmoil in neighboring Bulgaria; that country had its own coup against the pro-Axis government just two weeks later, ensuring that the Allied victory would come much more quickly.

Preparations for King Michael's Coup started in June 1944, when the king's representatives first met with conspirators from Romania's underground communist movement. The conspirators presented Michael with a plan which involved summoning Antonescu to his palace and arresting him.

As commander-in-chief of the army, Michael then ordered the military to turn their guns against German forces on their territory. The country's military later joined the Red Army in its Eastern European campaign, fighting Nazi forces through Hungary and Czechoslovakia. The final point of the plan involved the creation of a coalition government, with Michael remaining, at least for the moment, at his post as king.

Michael's decision earned him tremendous respect from Moscow. In 1945, Soviet leader Joseph Stalin awarded the young king the Order of Victory, the USSR's highest wartime military decoration, for his "courageous act," taken at a "moment when there was no clear sign yet of Germany's defeat." Michael received a US Legion of Merit medal from President Truman in 1946, and foreign honors from Russia, Belgium, the Czech Republic, Finland, France, Greece, Italy, Poland, Sweden and the United Kingdom in the years that followed.

© CC0
King Michael I of Romania. (File)
© Sputnik / Sergey Guneev
Moldova, Romania Part of West's Anti-Russian 'Geopolitical Game' - Dodon
After the war, a pro-Soviet government took power in Romania. In late 1947, Michael was forced to abdicate and to leave the country, which was declared a socialist republic. The former king and his family settled in Switzerland, where Michael worked as a farmer, test pilot, and eventually, as a broker. In 1990, a year after Romania's anti-communist revolution, Michael returned to his native soil for the first time. Facing difficulties entering the country well into the mid-1990s, in 1997, his Romanian citizenship was finally restored, and several royal residences were returned to his family.

While Michael has remained a popular public figure among the majority of Romanians, Romania has made no effort to return to the monarchy, and the former king never wanted to force the issue, saying that it was something Romanians must decide.

Michael's wife, Queen Anne, died in August 2016, at the age of 92. He is survived by five daughters, the eldest of whom will succeed him as the head of the royal family.