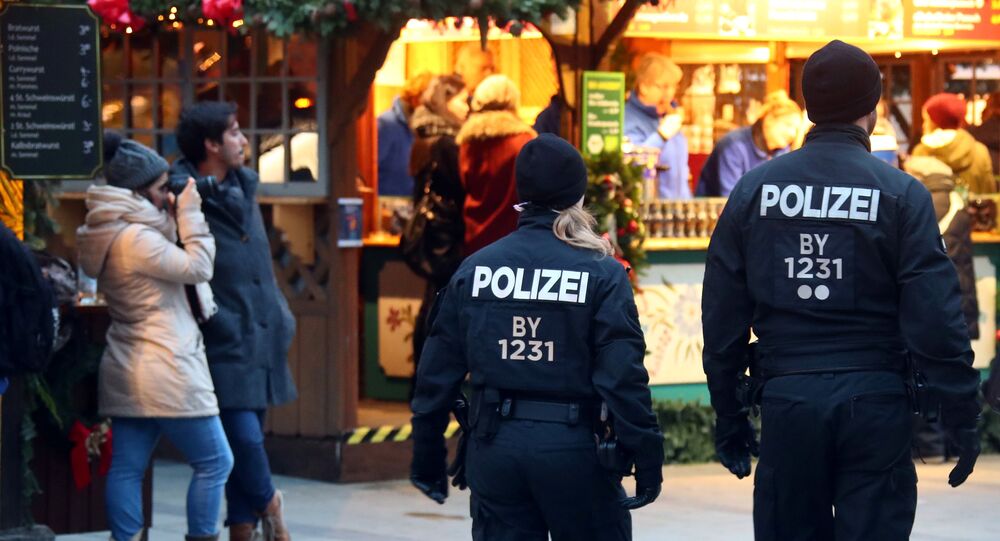 The incident triggered a mass evacuation and raised concerns over possible terror attacks in the country.

German police are increasing their presence at Christmas markets following a bomb alarm on Friday when a suspicious package was found in Potsdam's downtown neighborhood, Deutsche Welle reported.

The package that was revealed to contain a metal cylinder, powder, nails and a large firework was deemed by the German police as "dangerous" and disposed of in a controlled explosion.

According to a police spokesperson, there was no detonator inside, which led the police to assume that it might have been a fake bomb.

"No explosives were found," the spokesperson said, cited by Deutsche Welle.

© AP Photo / Martin Meissner
'Dangerous' Device Found at Potsdam Christmas Market Defused - German Police
The increase in police presence will primarily concern Christmas markets throughout the eastern state of Brandenburg and "particularly in Potsdam" where the incident took place, according to reports.

At the same time, law-enforcement agencies are unsure if the market itself, or a nearby pharmacy where the package was delivered, was a target of the attack. Police are reportedly still searching for the wrongdoer.

In November, six men, allegedly belonging to the Daesh terrorist organization, were detained.

The men were reportedly plotting an armed attack at a Christmas market in the city of Essen.

Germany has been on edge after a string of Islamist-linked attacks last year, the deadliest being a truck-ramming attack at a Berlin Christmas market. The self-confessed Daesh member, Anis Amri, drove a stolen truck into a crowd, killing 12 people and injuring 48 others.