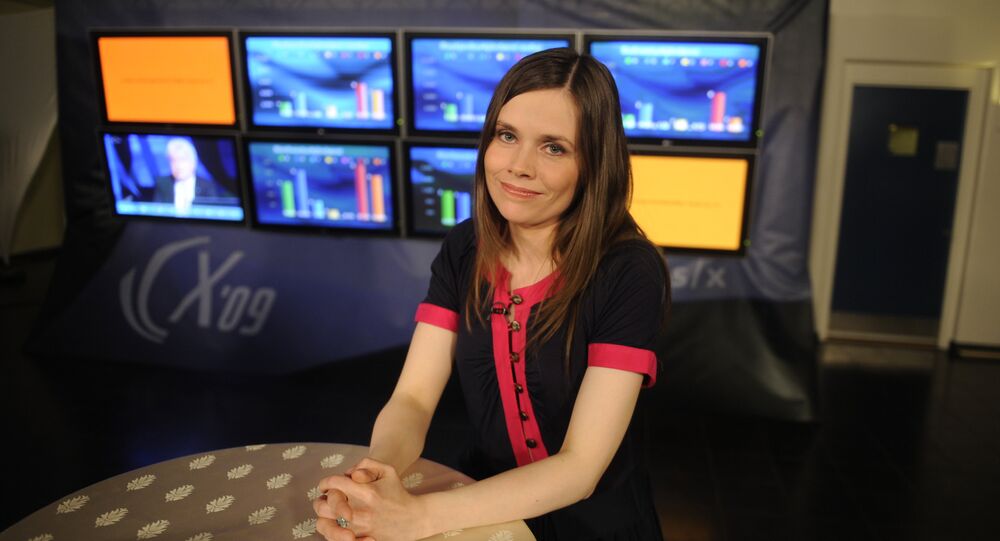 Iceland has finally appointed a new government - at its head, the country's second female prime minister - in the hope of restoring political stability after a number of scandals.

Katrin Jakobsdottir, widely considered as Iceland's most trusted politician, has now become the country's new prime minister following the formation of a three-party coalition government after the October election — its second snap poll in less than a year.

The 41-year-old leader of the Left-Green movement — formerly the education minister — reached an accord with the center-right Independence and Progressive parties after weeks of negotiations.

Congrats and best wishes to the new prime minister of Iceland @katrinjak, Katrin Jakobsdottir. She is 41 and mother of three. Small nations make big changes!

​Joining her in government will be outgoing prime minister Bjarni Benediktsson whose Independence party narrowly won the October election, but lost a quarter of its seats, paving the way for Jakobsdottir to form a left-led coalition.

Magnus Sveinn Helgason, editor of Iceland Magazine, believes there's greater confidence and optimism, and a sense the country has put its previous problems behind it.

"Some of the instability in the past has been down to scandals — whether this will stop from resurfacing is impossible to say. However, the promises of the new government has been welcomed by the greater public here," he told Sputnik.

"The prime minister is without doubt the most popular politician in Iceland alongside the president. They're two politicians who enjoy the greatest trust and this has been shown in the opinion polls, so that's promising. Katrin has a more solid majority than the previous one which had just a one seat majority. This is also a grand coalition with two of the biggest parties and covers an even greater political spectrum. The policy agreement of the new government includes investment in social and physical infrastructure, and it promises to tackle poverty and an ambitious agenda on environmental issues."

The new prime minister of Iceland is Katrín Jakobsdóttir: a 41-year-old democratic socialist, feminist, anti-militarist who says Iceland will expand its health-care system, "go farther than the Paris Accord" in fighting climate change and strive for increased gender equality. pic.twitter.com/vjYeYMLHjA

​Helgason said these were the areas the majority of Icelanders were concerned about.

"If the new government gets something done about [them] then it will bring about a return to political stability and normality," he suggested.

Icelandanders went to the polls after Benediktsson's centre-right coalition collapsed 10 months after taking office over an alleged attempt to cover up efforts by his father to help "restore the honor" of a convicted child offender.

Previously an election was called following the resignation of Sigmundur Davio Gunnlaugsson after it emerged in the Panama Papers that his family had sheltered money offshore sparking public outrage.

© REUTERS / Geirix
Early Election in Scandal-Plagued Iceland Results in Blurred Political Landscape
In the wake of these scandals, polls revealed almost half of Iceland's voters wanted Jakobsdottir, a mother-of-three, to become their next prime minister.

Speaking at a news conference in the capital Reykjavik on November 30, she said: "It's important we try to change the way we work together. This agreement strikes a new chord."

This view was echoed by Benediktsson, who becomes finance minister, adding: "All Icelanders will enjoy the benefits of this agreement, both with regards to social security and general prosperity."

​Cited in opinion polls as being the most trusted and well-liked politicians, Jakobsdottir becomes Iceland's second female prime minister after Johanna Sigurdardottir, who took the post in 2009. The country also had the world's first directly elected female president, Vigdis Finnbogadottir, who served from 1980 to 1996.

Before getting into politics, the premier wrote her thesis on Icelandic crime novelist Arnaldur Indridason. She hails from a family of poets, professors and politicians.