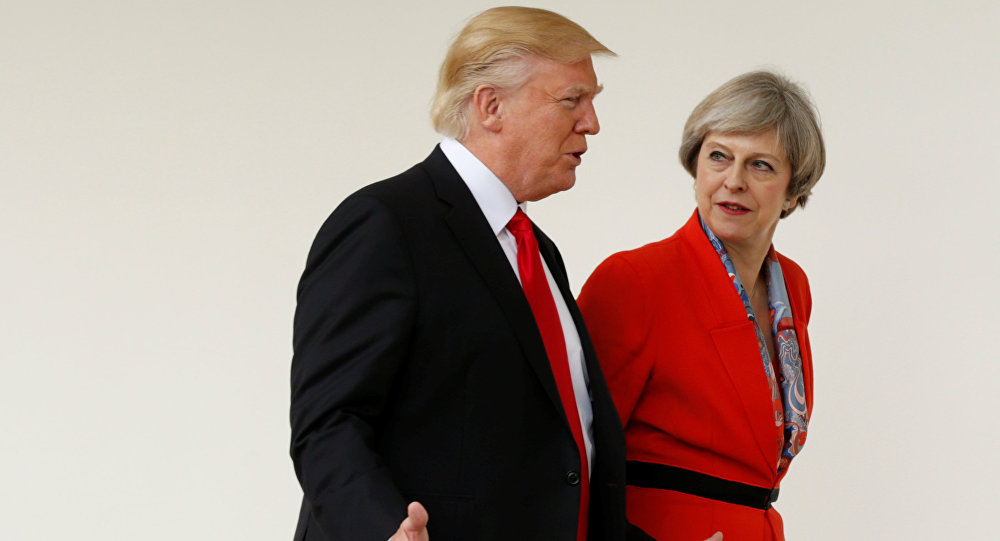 British Prime Minister Theresa May defended her nation’s widespread condemnation of US President Donald Trump’s retweet of a video posted by a British far-right, ultranationalist leader. May said that her nation is willing to criticize the US, despite the close alliance between the former colony and mother country.

"The fact that we work together does not mean that we're afraid to say when we think the United States has got it wrong, and to be very clear with them. And I'm very clear that retweeting from Britain First was the wrong thing to do," May told an audience in Amman, Jordan.

"Britain First is a hateful organization. It seeks to spread division and mistrust in our communities. It stands in fundamental opposition to the values that we share as a nation — values of respect, tolerance and, dare I say it, common decency." May's comments were met with applause.

The veracity of the videos has been called into question, with at least one of the videos proved to be falsely captioned: the first video claimed to be footage of a Muslim "migrant" assaulting a Dutch boy, but Dutch public prosecutors confirmed that the attacker was a Dutch national and the incident was a "quarrel between 2 underage boys."

White House Press Secretary Sarah Huckabee Sanders defended the videos, saying that it didn't matter if they were real or not. "Whether it's a real video, the threat is real. [Trump's] goal is to promote strong border security and strong national security," she said on Wednesday.

May's initial reaction to the videos was a far gentler rebuke. A May spokesman said on Wednesday that Britain First's "hateful narratives which peddle lies and stoke tensions" were "wrong" to disseminate. Trump replied that May should focus on the threat of Islamic terror within the UK.

.@Theresa_May, don’t focus on me, focus on the destructive Radical Islamic Terrorism that is taking place within the United Kingdom. We are doing just fine!

Nearly every prominent British leader has spoken out against Trump sharing the videos. Kim Darroch, the British ambassador to the US, tweeted implicit criticism of Trump's actions, defending British Muslims as "peaceful and law abiding citizens" and saying that his country "overwhelmingly reject[s] the prejudiced rhetoric of the far right."

British people overwhelmingly reject the prejudiced rhetoric of the far right, which seek to divide communities & erode decency, tolerance & respect. British Muslims are peaceful and law abiding citizens. And I raised these concerns with the White House yesterday.

Even Trump's most high-profile ally in the British government, Foreign Secretary Boris Johnson, wasn't in his corner.

Britain First is a divisive, hateful group whose views are not in line with our values. UK has a proud history as an open, tolerant society & hate speech has no place here

Naturally, left-wing British figures were more scathing in their condemnations. Labour MP Jeremy Corbyn, leader of the opposition in the UK Parliament, referred to Trump's actions as "abhorrent." London Mayor Sadiq Khan, a frequent Twitter sparring partner of Trump's, said that May should cancel Trump's planned visit to the UK.

"It beggars belief that the President of our closest ally doesn't see that his support of this extremist group actively undermines the values of tolerance and diversity that makes Britain so great," Khan said in a statement. "It is increasingly clear that any official visit at all from President Trump to Britain would not be welcome." He also called on Trump to apologize to the British people.

May rebuffed Khan's suggestion, and said she would not revoke Trump's invitation.

EU Ratcheting Up Pressure on British PM May Over Brexit Impasse