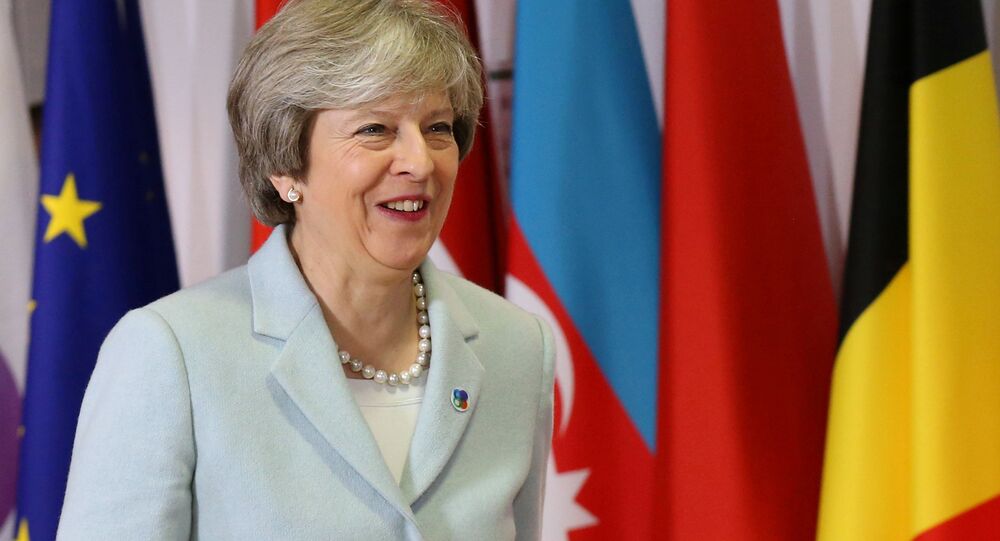 In just the latest talking up of the fictional "Russian threat" posed to Eastern Europe, UK Prime Minister Theresa May used her speech at a European Union summit to direct fighting words at Moscow. Her rhetoric comes mere days after the US approved highly provocative sales of military technology to Poland.

UK Prime Minister Theresa May intends to designate Russia a "hostile state" and will pledge over US$130 million to fight "disinformation" in Eastern Europe at a November 24 European Union summit.

"We must be open-eyed to the actions of hostile states like Russia which threaten [Eastern Europe's] potential and attempt to tear our collective strength apart. The UK may be leaving the EU but we are not leaving Europe, and we are unconditionally committed to maintaining Europe's security," said.

​May's tone is considerably more hawkish than other EU officials', who were quick to stress the summit — which will be attended by leaders of Armenia, Azerbaijan, Georgia, Moldova, and Ukraine — was intended to be "non-confrontational" and "not aimed against anybody."

The PM's rhetoric also comes despite Russian officials warning it would "harm relations" if the EU were to take active measures against independent media outlets such as Sputnik and RT.

Suggestions of Russian hostility are nothing new in the Western mainstream — ever since 2014, if not earlier, the notion of "Russian threat" has been invoked, and used to justify a huge NATO buildup in Eastern Europe.

As a result, as of November 2017, there is an unbroken line of troops, planes, ships and missile defense systems running from the Northern tip of Belarus to Russia's southernmost border — and this buildup is continuing apace.

On top of this, in sheer numerical terms, Western collectively have a far greater potential for hostility than Russia — the Federation's defense budget totals US$66 billion, while European Uniopn member states alone have a collective total defense expenditure of US$263 billion, and the US is the world's largest spender on arms, investing US$611 billion — as much as the next seven largest-spending countries combined.

Foreign policy expert Dmitry Ofitserov-Belsky has suggested talking about a "more assertive Russia" is the only way to "keep defense outlays up."

"The NATO leadership is trying to convince member-states to spend more on defense — the Czech Republic, Bulgaria, Romania and others, especially in Eastern Europe are not eager to splurge on arms, and raising fears of an imaginary ‘Russian aggression' is the only way to make them pay up," Ofitserov-Belsky previously told Sputnik.

Speaking at a memorial event, Jones began by hailing the Gallipoli Campaign — a calamitous World War One operation widely considered one of the greatest disasters in military history, in which 58,000 allied soldiers, and 87,000 Ottoman soldiers lost their lives, and at least 300,000 more on both sides were seriously wounded.

If this speech were given by a Russian or Iranian head of military, our leaders would be preparing for war and it would be all over the media. https://t.co/JzPTKMvGBq pic.twitter.com/KKOcrbog6D

​​The bulk of his oratory, however, focused on the challenges Western naval and military leaders faced in a "contested battlespace" — just as commanders at Gallipoli "faced new and unfamiliar multi-dimensional threats," modern armed forces must now work in "an increasingly complex" environment.

"Since the end of the Cold War, Western navies have, by and large, enjoyed a degree of superiority at sea which enabled us to work across all these domains unimpeded — yet today, the space in which we operate is becoming more congested and contested… as a result of broader geo-strategic trends. You don't need to look very far to see rising and resurgent powers flex their muscles," he explained.

Head of Royal Navy explains the problem: the West no longer has total military control of the world. https://t.co/JzPTKMvGBq pic.twitter.com/EQm6AkYnMb

​Examples of "rising and resurgent powers" flexing their proverbial muscles cited by Jones included increased Russian submarine activity in the North Atlantic, routine Chinese naval deployments to the Middle East, Somali Basin and Gulf of Guinea, and joint Russian-Chinese naval exercises in the Baltic. Suddenly, he said, the UK's "own European backyard is a little more crowded."

In essence, Jones suggested the major problem the West faces is its overwhelming military predominance, and ability to commit major military actions without hindrance, is slightly compromised. Any countries even vaguely challenging this presumptive hegemony are regarded as "hostile" states.