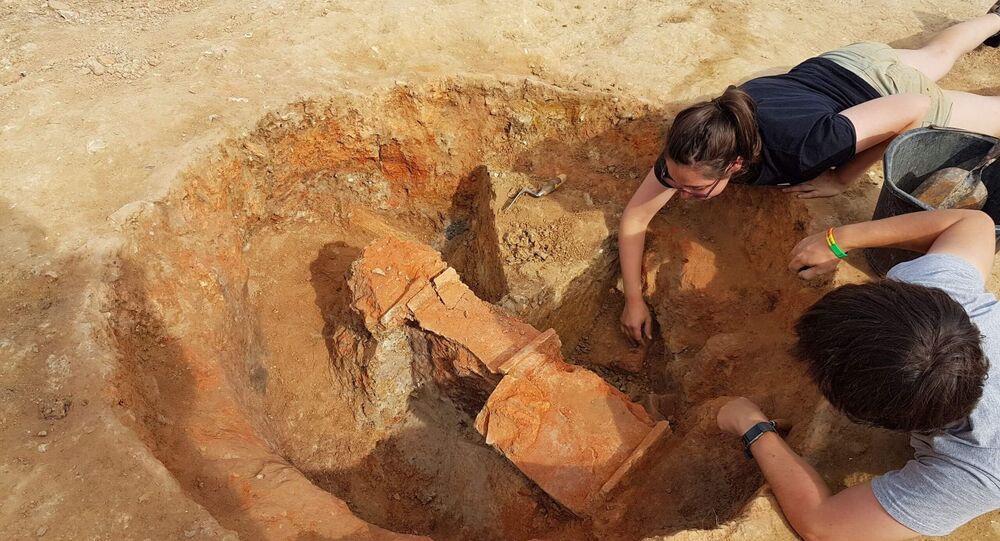 The University of Reading has announced evidence linking the remains of three massive Roman temples in Hampshire to the infamous Roman Emperor.

An enormous religious complex under excavation in the English town of Silchester, where the Roman settlement of Calleva once stood has been studied since the Victorian era, but the first evidence of the Emperor who built them, the tyrannical and extravagant Nero, was announced November 22 by University Archaeologists.

The Emperor's name was discovered printed on shards of pottery discovered in what is believed to have been a "ritual pit," within the temple-grounds. Historians and archaeologists have being trying to determine who commissioned the buildings for more than a century.

"Only a handful of Nero-stamped tiles have ever been found in the UK, so to unearth this many was very exciting. It adds to the evidence that Nero saw Silchester as a pet project where he could construct extravagant buildings like those seen in Rome, to inspire awe among his subjects in the UK," Professor Mike Fulford told Sputnik.

​Those studying the site believe it was the product of a conscious policy of Nero to construct elaborate monuments in far-flung corners of the empire to impress the power of Rome upon conquered peoples.

© Photo : University of Reading
Overhead view of the kiln site in Little London.

Precisely who the temples were dedicated to is unclear, but the archaeologists have uncovered evidence of worship to a Celtic version of the Roman god of war, Mars, as well as the Egyptian deity Serapis and the Iranian solar god Mithras.

Nero, who ruled for 13 years from AD54 to 68, was one of the empire's most feared despots, known for cruelty unusual even by the standards of the time.

The Roman tyrant is widely believed to have ordered the assassination of his own mother Agrippina The Younger who survived a shipwreck staged by her son and then hacked to death by his body-guards when confronting him. Nero has also been remembered for his savage treatment of Rome's Christians whom he often subjected to brutal public executions.

As well as his cruelty, Nero was also known for his extravagance, building an enormous palace complex, the Domus Aurea (The Golden House) over large parts of Rome that burned down in the great fire of Rome in AD 64. He is popularly believed to have had the fire lit deliberately to clear land for the palace to be built, though the issue is controversial amongst historians.