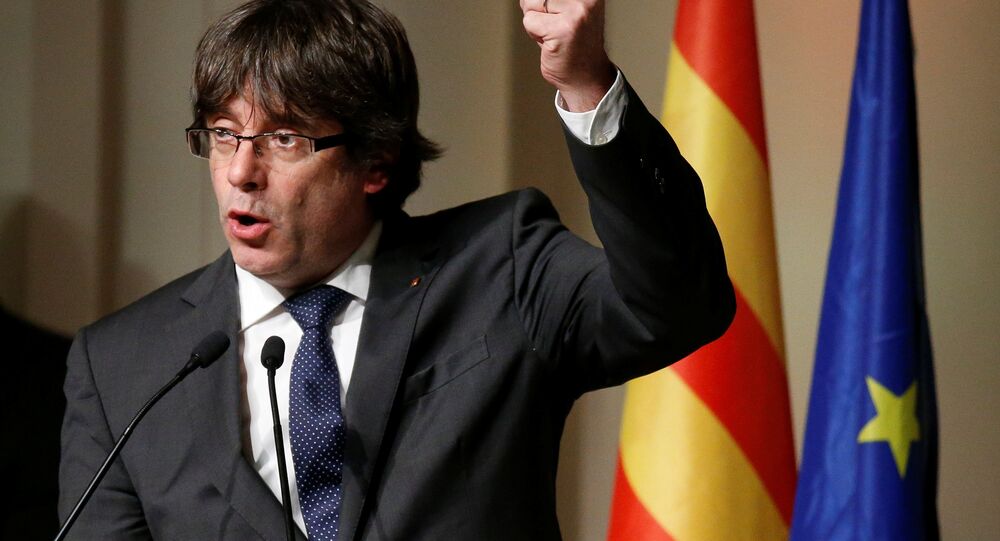 Former Catalan leader Carles Puigdemont is continuing to oppose the Spanish central government amid the latter's moves to take administrative control over the region.

MOSCOW (Sputnik) — Carles Puigdemont rejected the 112,000-euro ($132,500) annual pension that he was entitled to as the former Catalan leader as he still considers himself to be the head of the region, the Europa Press news agency reported.

© REUTERS / Pascal Rossignol
Belgium Court to Examine Spain Request to Extradite Catalan Ministers on Friday
Earlier this week, Spain’s Finance Minister Cristobal Montoro gave Puigdemont 10 days to request his pension, the total of which, according to Catalan law, amounts to 80 percent of his salary and is paid over four years.

Upon turning 65, the former leaders of Catalonia become entitled to an additional monthly pension comprising 60 percent of the monthly wages received in office.

Puigdemont and four other Catalan ministers fled to Brussels in late October after Spain dissolved Catalonia's government and parliament following the region's declaration of independence.

In early November, Madrid issued arrest warrants for Puigdemont and the ministers on charges of sedition, organizing an uprising and embezzling state funds, among others, carry a jail term of more than 50 years. Puigdemont said he would return voluntarily if he were guaranteed a fair trial.

On November 17, the Brussels prosecutor's office demanded that Puigdemont and the ministers be extradited to Spain.