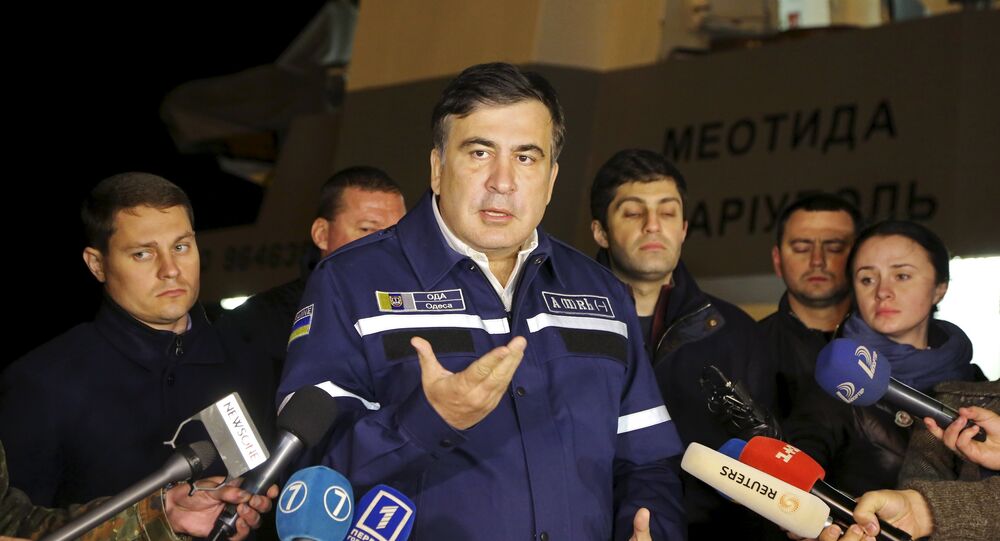 Ukrainian authorities are preparing an "operation" to forcefully remove the disgruntled politician, who became stateless after Ukraine stripped him of its citizenship, a source close to Ukraine’s Security Service told the Strana online publication.

Georgia’s ex-president and former Ukrainian regional governor, Mikheil Saakashvili, may be expelled from Ukraine in the coming weeks, sources  have told a local newspaper.

The special operation will reportedly involve several law enforcement agencies and will be carried out ahead of New Year celebrations to minimize public attention. The outlet said that the Ukrainian Security Service had refused to comment on further details or allegations.

In October, former governor of Odessa region presented his own makeshift "great plan" for the swift political rescue of Ukraine, using the building of the country's parliament as an improvised projector screen.

© Sputnik / Iliya Pitalev
WATCH: Ex-Odessa Governor Breaks Through Ukrainian Border With Help of Supporters
Ukraine accuses the 49-year-old politician of lying on his citizenship application. He will reportedly be expelled back to Poland, while Georgia is seeking his extradition for abuse of power and corruption charges.

The former Georgian president was appointed the Odessa Region's governor in May 2015 and stripped of Georgian citizenship upon receiving his Ukrainian passport. He resigned in November 2016, accusing Ukrainian officials of a lack of interest in the fight against corruption. Later, Saakashvili was stripped of his Ukrainian citizenship by President Petro Poroshenko on the pretext of violating the country's law.

In September, Mikheil Saakashvili audaciously breached the country's border with a frenetic crowd of his supporters, avoiding any security or pass checks.