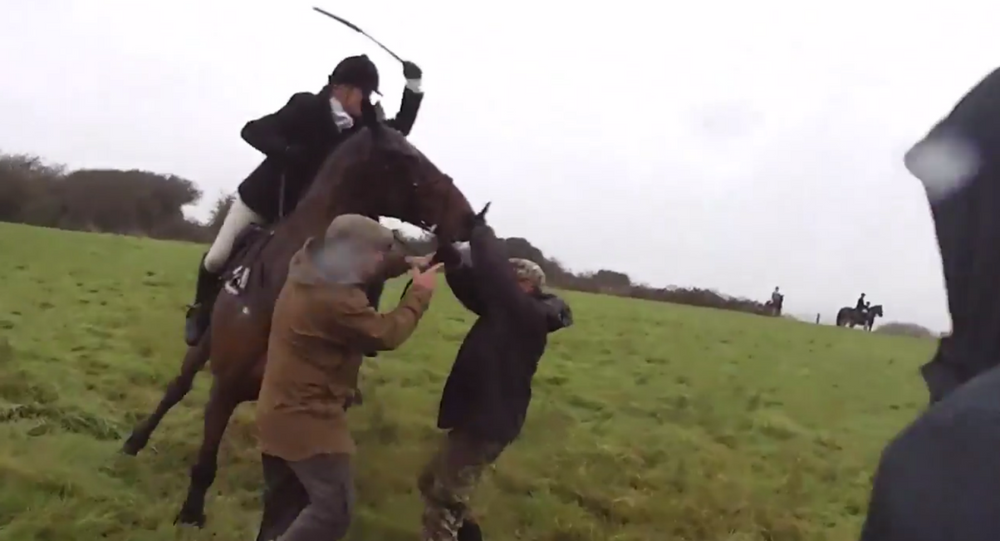 Shared to Facebook Monday, footage filmed by animal rights group Brighton Hunt Saboteurs shows a fox hunter repeatedly beating an anti-hunting protester with a horsewhip after the protester grabbed the reins of her horse.

The confrontation reportedly broke out after the Saboteurs descended onto the Pevensey Marshes in East Sussex "to sabotage the East Sussex and Romney Marsh Hunt," the group's Facebook post reads.

Filmed from two different angles, the video shows the riding crop being brought out after the masked animal rights activist ignored the rider's warnings to stay away from the horse. The animals rights group alleges that the rider, who was "unable to reconcile with the fact that most people find her 'hobby' abhorrent," initiated the attack after she used the horse to try to attack them.

ABC News reported that the man received a few bruises and a bump to the head, but ultimately did not require any medical treatment.

Mixed reactions have since popped up on the group's Facebook page since the video was shared.

"Firstly I 100% disagree with hunting," one commenter wrote. "But in this case I have to disagree with your actions, by grabbing the head collar like that, not only could you [have] injured the horse, but the rider could also [have] been thrown off which could [have] resulted in either no injuries, minor injuries or very serious."

"It is clear by this film that the woman rider is using her horse as a means of out-and-out aggression," another commenter opposing the rider's assault wrote. "It is quite understandable why the man tries to grab the reins of the horse."

Sussex Police later announced that a third party report of the assault was filed, but they are appealing for more witnesses to come forward.

"The informant was not a witness to the incident," a spokesperson for the force said in a statement. "But police have now identified the alleged victim and an investigation is underway."

Nothing Unusual, Just a Horse in the Back of a Car